I started out by making the bodice lining and then mounted the silk to it. For this I made things easy on myself and just used the bodice pattern pieces from my Italian gown since I already knew they fit. I only changed the centre back piece a little to give it a deeper point at the bottom.

The first part of the silk I worked on was the back en fourreau – although I did make a mock-up first! I took the pattern piece I used for the lining and combined it with one of the 1770s en fourreau dresses in Patterns of Fashion. I wanted to see if the regular en fourreau piece could just be pleated in the opposite direction to get what I wanted – and it worked! Imagine how happy I was to find out it really was just that easy!

So I went ahead and cut out the silk and pleated and pinned it to the back lining using my inspiration image as a guide:

Then I stitched it all down with combination back-prick stitches, cut the bodice sides of the silk and mounted them to the lining with the same type of stitches.

For the bodice front I used my pattern piece as the starting point and just changed the cutting/style lines to get the two layers of the cutaway front look. I mounted the main bodice pieces to the lining and finished all the way around the front contrast pieces before starting to tack the skirt.

I then pleated up the skirt with small knife pleats that are 1 1/4″ total but show only 1/4″ on the outside. And thank goodness for the stripes on this fabric – teeny as they are – that helped me keep my pleats straight!

I sewed the waist seam right sides together with backstitch for sturdiness – but only with the silk layers together. I had sewn the silk bodice layers separately from the linen for the bottom 2″ or so:

In order to be able to do a clean-finish inside the waist! I actually got this idea from looking through my research photos of the interiors of 1780s dresses. I was so tickled when I saw this technique on one of the dresses, I think it’s just so clever and is really so easy to do!

So here’s an in-process pic of the finished back and waist seam – I was so pleased with how it turned out!

Next up were the back neckline yoke/binding and the sleeves. These are both done in a way that’s kind of a holdover from mid-century construction techniques but which were still used sometimes later in the century.

A couple shots of the finished dress with the petticoat made from the same lightweight silk I used for the bodice contrast layer:

I thought the dress looked rather plain on its own so started playing with ideas for sashes:

I really like how this looked overall but didn’t like to cover up so much of the back pleating as it’s pretty much the best feature of the whole dress!

So I started playing around with faux-sash ideas that went across the front only:

Oh – and I added a ruffle to the petticoat hem as well. I wasn’t totally sure how I’d like it at first but I think turned out great and really adds something to the whole look!

I did ultimately end up choosing the black – it’s this gorgeous scrap of vintage/antique satin back silk velvet ribbon. It’s a strong contrast but I planned to wear it with my black Dunmores and add a few other black touches so I figured that would help it harmonize better.

You may be wondering what the impetus was behind making this new gown at this time (or maybe not, because do we really ever need a particular excuse to make pretty dresses?).

Well, it was to wear at a specific event that I was so very excited about: The Big-Ass Hat Tea. Yes, that is actually what it was called.

So, to complete my look I needed a hat. And not just any hat. A Big-Ass Hat.

I made the hat within only a few days of the event so don’t have very many in-process pics but I’ll show you what I’ve got and try to fill in the blanks.

Oh – and after debating for a couple weeks what kind of late 18th century style hat I wanted here is the inspiration I settled on, proportions and all: To make my hat I started from the edge of the brim and worked upwards. I took some millinery wire and determined the circumference I wanted. Then I took a straight strip of buckram, sewed it to the hat wire circle and then slit it at regular (approx. 5″) intervals so I had a whole series of flaps attached to the hat wire. I overlapped them at the top until I got the size I wanted for the base of the crown. I also bulged out the overlaps a little to create some curve to the brim like in the second image – although I think I did this a little too much and would make it a much gentler curve if I were to do it again. Then I stitched all the buckram flaps together to get a solid shape:

As you can also see from the photo above, I covered the underside of the brim before the outside. I used scraps of sage/olive silk taffeta left over from my Natural Form Tea Gown. It’s just a tube that’s the same circumference as the brim’s outer edge and just gathered up to the inner edge.

I did the exact same thing to cover the outside of the brim, using some of the leftover fabric from my dress (I still have something like 6m left). Of course, it was only after I’d done this that I realized I needed some wire around the inner edge of the brim for stability. Fortunately, it was easier to add than I feared it would be:

The crown is made from 2 big circles of cotton organdy and a really pretty translucent (rather than transparent) ivory silk organza from my stash. The organdy circle is a little smaller than the organza to enable the latter to puff and drape about it a little more freely.

Inside the crown is a shallow tube of white linen with a drawstring in it for adjustability. This does not allow it to sit on the head securely, it’s actually meant to keep help keep the hat as high on the head as possible considering how large the brim is. In future I will likely need/want to use a hatpin in it to hold it more firmly to my hedgehog wig – if I can ever find one long enough! Ha!

I trimmed the hat with the gold figured ribbon I had earlier experimented with as a sash – without cutting it! It’s all puffed and gathered and made into the bow at the front just by folding and pinning. I had some other black velvet ribbon scraps that I made into accents tucked and pinned into the bow and voila!

So, how did it all look together? Here are a few photos from the Big-Ass Hat Tea (for which I was unfortunately sick but was encouraged to come anyway and I’m so glad I powered through and did!)

The following photos are courtesy of Dames a la Mode:

The Hat inspired some shenanigans :o)

It ate other hats:

provided the base for a hat tower: 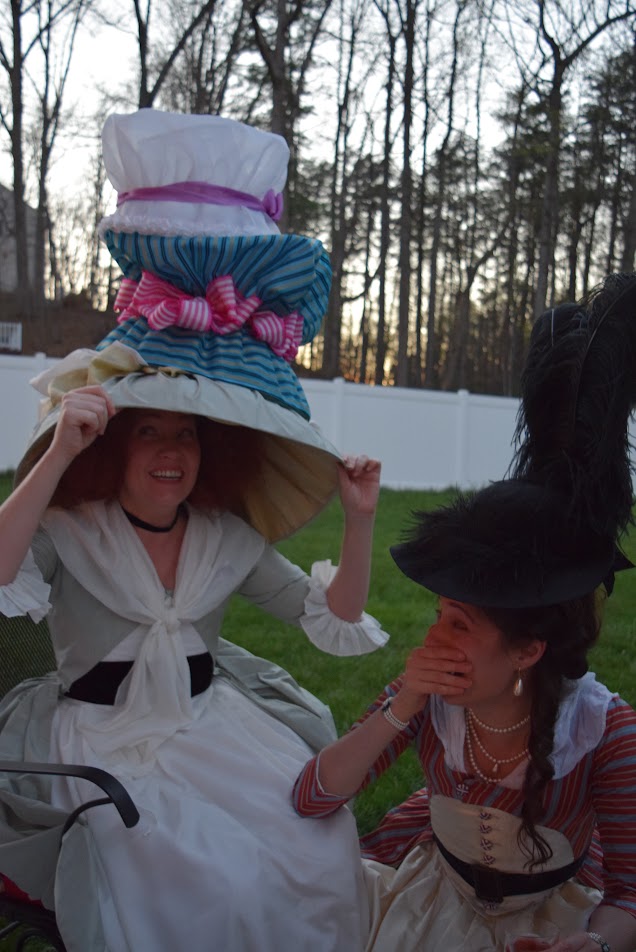 Provided exceptional shade from the sun and a place to pretend-pout:

A few more courtesy of Robin:

A few other people tried on The Hat

The inspirational Cynthia of Redthreaded had fun with it (btw – those gold dots on her dress that really set the whole thing off? She added those individually BY HAND!!!)

Taylor looked totally bitchin’ in it!

And then last week Taylor (aka Dames a la Mode) suggest a photoshoot at the National Arboretum – which was just inspired! Such a beautiful place and so perfect for taking pretty pictures!

Not keen on the wrinkling happening at the bottom of the cutaway cause by the bias-cut of the fabric, so this is something to tweak.

Also – the back pleating/stitching is slightly marred by all the ties around my waist of petticoats and 3 layers of false rump. Another tweak to make: add boning to the back seams to preserve a smooth line.

Just after this photo I noticed a big old tree a little ways off, so we went to check it out

That’s just a portion of the trunk:

Look, something actually dwarfs The Hat!

This is definitely a new favourite place to take photos.

Overall I’m very happy with this outfit but there are a few tweaks to make, which I’m going to list here for my own reference: