I’ve never done a sewing plans post before but with the year ahead already starting to fill-up event-wise I thought it might be useful for me to have it all laid out in one post. This is going to be (primarily) historical sewing plans because they (usually, though not always) involve more planning and lead-up time. Modern makes are often more spontaneous.

So here’s what’s on the docket for this year in (roughly) order of making:

This will probably be the first thing I make since I need it for a workshop I’m presenting at and attending on February 11. I’m going to use a piece ivory silk/cotton voile that’s already in my stash. I’m probably fudging on the HA of the fabric but for the moment I don’t care. It’s close enough, it’s from stash and it needs to be done soon.

I guess I should maybe include the pieces I’ll be making at the workshop, too. It’s a “Mitts, Muffs and Hoods” workshop to make 18th century winter accessories. I’m pretty excited – I’ve been wanting to make a pair of 18thc mitts for ages! And the other pieces will be incredibly useful (and hopefully pretty) as well!

This will be the first large historical project of the year and it has a deadline of early April – so I better get my butt in gear soon! I’m making it to attend an event called the “Big-Ass Hat Tea”(!!!) I’m still trying to decide what style of Big-Ass Hat I want to make, but here are the plans for the dress I’ll make to go with it.

It’s going to be a cutaway front robe a l’Anglaise in a pale robin’s egg micro-stripe silk taffeta with a thin, semi-sheer ivory silk for the front inset/false waistcoat and petticoat.

Here is a quick little bit of fabric draping that gives an idea of the fabrics/colours and how I’ll use them:

I’m not sure how HA or plausible this particular style of stripe may be but the colour and overall feel of it has made me think of a late Georgian dress ever since I first saw it in the store. I initially bought only 6 metres of it, figuring that would be plenty for a late 18th century dress – which it probably will be. But I was so obsessed with it I went back to the store a couple days later and bought the rest – a little under another 6m, lol!

And some of my inspiration images for overall design/style: A couple examples of blue striped gowns with white bodice front and pettis. I’m thinking of styling my petti off of Vigee-Lebrun’s on the right. And I’ll be going for the deep-V bodice back you can see in these two images but as a true late Anglaise with a narrow en fourreau back. And this is the style of pleated back I want to do.

I’m going to try to use one of the later Anglaise patterns in Patterns of Fashion as a starting point and then alter and fiddle with it to get what I want.

This project was started back in the summer on a whim but became a UFO as I wasn’t able to finish it before I started having deadline sewing come up in the fall. However, there is a Victorian tea happening in May that I hope to attend, not least because it gives me a reason to finish this off – and who doesn’t love getting a UFO off their plate, amiright?!

This one is also inspired by the fabric – a narrow mint and white stripe cotton I found at a great price online so bought 10 yards of. Going through my swatch book I happened upon some raspberry-coloured cotton sateen already in the stash that I really like paired with the mint stripe.

Here’s what I’ve got so far (I have process photos for this that I’ll share when time comes for a devoted blog post of this dress):

The hem trimming was partially inspired by the dress below, though I am now wondering how I might have liked it with larger…….what would you call those? Just appliques?

I saw a picture of a stacked box pleat hem ruffle in one my Victorian fashion plate books and decided to try it out. In case you can’t see it, there’s also a small knife pleated hem ruffle below it in the raspberry sateen. I actually haven’t finally settled on a bodice style, but looking at one of my other sort-of inspiration images (the dress on the right) I’m leaning towards its bodice: I actually found this image after I’d started this project but it gave me the idea for the raspberry bows on the overskirt and bottom hem ruffle – although mine is obviously as separate one rather than a hem binding.

One thing I’m wondering about this bodice – do you think it actually opens up at centre front and the lace is poking through or is the lace simply applied to the centre front? It would seem a bit odd to have it open with buttons already at the sides of the front inset, one side of which could easily be functional (and of which there are surviving examples – such as one in Patterns of Fashion 2). What do you think? What would you do?

2017 is Canada’s Sesquicentennial (say that 10x fast) or 150th birthday. So a friend and I are planning to make 1867-era dresses in red and white for the occasion. So this also has a deadline, of July 1 (or a little before). Now, I’ll be honest, the 1860s is among my least favourite periods in fashion history. In fact, I find the whole 1840s through 60s mostly a snooze-fest; I’m perfectly happy to skip from 1830s glorious ridiculousness straight to bustles. However, I cannot change the date of confederation. What I can do is fudge the date of my dress ever-so-slightly.

This dress at the Met is my primary inspiration for my project: I’m not totally in love with how much satin trimming there is on the front of that skirt; I think I’ll leave most if not all of it off, though I do like the big rosette-bow-thing on there towards the hem.

I’m also thinking of a different hem treatment, partially due to my fabric choice.

I’m going to use white cotton organdy for the dress itself and accent it with red cotton sateen. 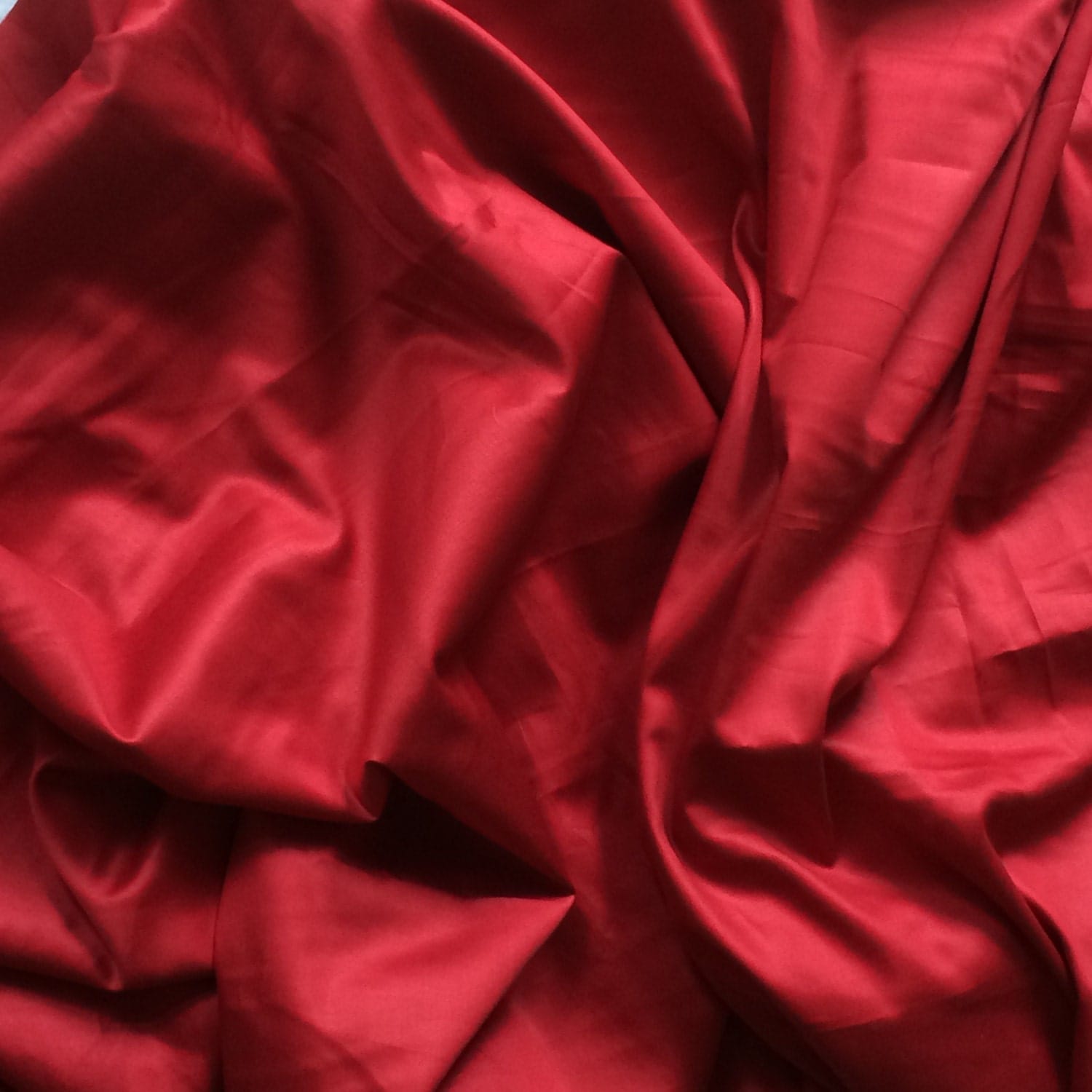 With the organdy being semi-sheer I’m not sure how doing that dagged ruffle bit with the satin ruffle peeking from underneath would work and I’m not sure I want to mess about with adding opaque fabric to the dress with how tricky it can be to match whites, etc, etc.

So I’m thinking of going with an all-applied hem decoration a la this dress: Only I think I’ll leave off most of those bows. Really, it’s just too many bows and too twee for me. (So. many. bows.)

This is going to be a pretty large-scale project since it’s a new period for me but it looks like Truly Victorian has all the patterns I need for it. I’m going to use the pink silk Victorian corset I already have but I’ll need a new cage/bustle:

Truly Victorian TV108 – Grand Bustle – it has hoops in the hem so it should work quite well for that transitional shape from elliptical crinoline to 1870s bustle.

Truly Victorian TV202 – Grand Parlour Skirt – it even looks like the gores are in the right place for adding that flange (?) of fabric to help pull in the back of the skirt

Truly Victorian TV400 – 1871 Day Bodice – this has both the long front ends and back peplum that I need. I’ll just leave buttons off the lower portion of the front and cut it with the higher neckline – OR – cut the higher neckline part as a separate, removable piece so I can make it a day-to-night bodice!

I still have 11m of this fabric:

I saw this painting: The Accomplice by Auguste Maurice Cabuzel, 1880

Not much more to say, really ;o)

There’s an evening bodice pattern in one of my Fashions of the Gilded Age books that’s nearly a dead ringer for this one and the skirt pieces should be pretty straightforward – even if I come out of this hating ruching, lol. The train looks to be just a long rectangular piece of fabric either gathered or pleated at the top. I’m thinking of making the train fully removable because I also happen to have a plaid silk taffeta that matches the teal silk satin quite nicely and just enough of it to make a Natural Form polonaise (I think) at a later date. So I may try to make the skirt of this such that it can go from night to day!

I’m bent and determined to get to Costume College this year and I’d love to make this for my Gala gown; but I do have other things I could wear for that if need be, so this one isn’t a top priority.  Although, of course, now that I’m looking at it again I’m drooling over it and want to make it right now! I do already have all the foundation garments and I’d have nearly a month between the Sesquicentennial and CoCo………

I’ve got a big birthday coming up this year in a little over 8 months. To celebrate I’ve decided I want to throw myself a Big Bustle Birthday Part: Big Party + Big Bustles!

For myself, I’m thinking of going 1875 (I’m looking at all the ladies on the left) It’s right on the cusp of Natural Form and I know these dresses, themselves, don’t have the hugest bustles but the big ones weren’t entirely gone by 1875: So I’m thinking of styles like the first three but with bustle fullness of the latter two.

The primary reason I’m looking to the first three fashion plates is because the main fabric I’m going to use is a pretty bold plaid and I wanted some idea of how plaids were used for more than an accent at this date: 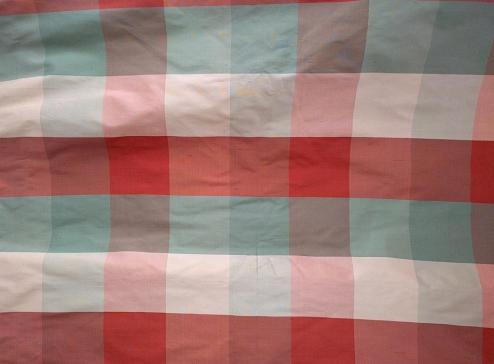 It’s actually a dupioni but fairly low slub and from even not-far distance looks pretty much like taffeta. And I have something like 11 metres of it that have been sitting around for a few years, so it’s getting used!

Here it is with accent fabric options. I’m definitely using the solid rust silk satin and one of the ivory silks – I just haven’t decided which one yet. I’m not 100% sure about the velvet ribbon yet but it might be nice to add something that’s not as completely matchy-matchy as the rest of it. What do you think of the ribbon – yea or nay? 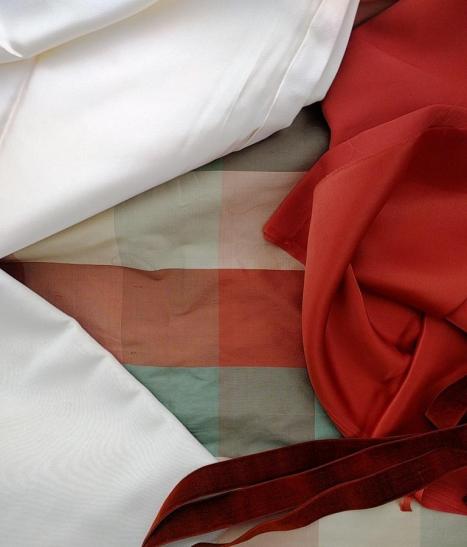 So these are most of my really big plans for the year – wish me luck!

Oh – apart from the Oscar de la Renta -inspired wedding gown I’m making for a good friend for the end of September!

Do you typically plan out your sewing year, or any part of it? What are you hoping to make in 2017?