Early in the year I became obsessed with late 1790s open robes and this pattern in particular. It’s the 1795 Open Robe pattern featured in (goddess) Janet Arnold’s Patterns of Fashion I. In fact, I have started getting obsessed with late 1790s fashion in general and believe I now prefer it to much of the later Regency aesthetic. I do love transitional periods! I love the residual 18th century volume and *floof* of these styles, not to mention the fun hair! And having looked at the insides of several surviving gowns and garments from this period I have also been quite charmed by the combinations of 18th century sewing techniques with new ones to suit the changing styles. I had wanted to make the Arnold open robe for some time, and finally got my kick-in-the-pants justification for a Twelfth Night Ball at the Riversdale House Museum just outside of DC in early January.

I made a somewhat unconventional fabric choice of viscose velvet in a dark royal blue colour.

unconventional point #1: it’s viscose and so technically a man-made fibre. However, I often give rayon/viscose a pass since it’s plant-derived (regenerated cellulose). Also, the pile of modern silk velvet is also viscose/rayon (it’s just the backing that’s silk), so there’s no advantage fibre-wise to using that and I also find the pile of (at least vintage) viscose velvet (which I think mine is) to be denser and thus richer than modern silk velvet, so actually gives a more correct period impression.

unconventional point #2: I dug around on Pinterest for quite a while looking for examples of velvet open robes and Regency-era dresses. I did fine several extant, fashion plate and portrait examples, but all from around 1810, give or take. I didn’t find any for the late 1790s. This makes sense since the late 1790s was all about lightness in dress textiles and by the 1810s you’re starting to see some heavier textiles and colours being reintroduced: I mulled this over for a couple of days and finally came to the conclusion of: screw it. I’d had the velvet in my stash for I don’t know how long and wanted to use it. And while my recent inclination had been to use it for an 1880s ball gown (in conjunction with something else in the stash) for whatever reason I was really drawn to using it for this open robe. So, as they say these days: sorry not sorry.

The robe is all hand-sewn with correct period techniques including the bodice lined in linen sewn with linen thread and silk thread for the rest of the sewing. (from what I’ve seen of extant garments so far, cotton linings didn’t really start coming in until at least the 1820s – anybody have evidence to the contrary? my expertise on such minutiae starts dwindling after 1805-1810)

Much of the sewing was quite easy and straightforward – hand sewing velvet is SO much easier than doing it on the machine! I may never machine-sew velvet ever again! (Not that I feel inclined to sew with velvet all that often, though). However, when it came time to do the pleats along the fronts I started cursing my decision to use velvet. The pleats on the actual pattern just don’t work in velvet, they are either too small or create too much bulk by being stacked/overlapped. So I had I ended up having to drape the pleats from scratch. Then it took multiple tries to wrangle them into something that looked relatively smooth and tidy.

Because I knew I’d be wearing the open robe with the white 1797 gown I recently made, which has elbow-length sleeves, I opted out of the sleeves in the Arnold pattern. However, I quite liked the look of short sleeves such as the example below and how American Duchess altered the sleeves of her open robe. Mine didn’t turn out quite as full as the ones above, but I think they’re alright and I definitely like the short sleeve look all round.

The velvet open robe was kind of a hit at the ball, but holy cow it was SO HOT to wear, especially during dancing.

I went for the full and somewhat messy hair look of the mid-late 1790s – it was really easy to do with a wig I already had. I then just wrapped a sheer, fringed scarf around it and stuck in a feather or two. I also accessorized with a matching collet necklace and earrings set from Dames a la Mode. 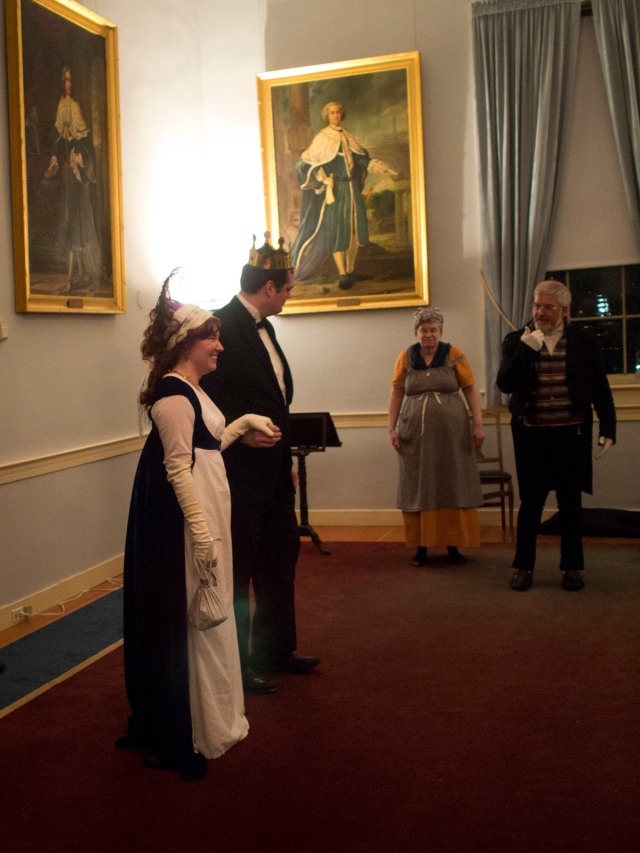 When we re-entered the ballroom after dinner for the second half of dancing we had to pull a paper slip from a hat to give us our “identity” or something for the rest of the dancing. I ended up picking out “Queen of the Ball”. I was supposed to wear a paper crown, but it didn’t work too well with my hair, so it became a sort of paper tiara instead, lol.

I already knew I was going to another ball in February and dreaded the idea of getting so hot and sweaty again. So, after a little debating with myself (because there was yet another event in a couple of weeks for which I needed to make something, because I didn’t have anything really appropriate) I decided to make another open robe in something lighter: silk taffeta. 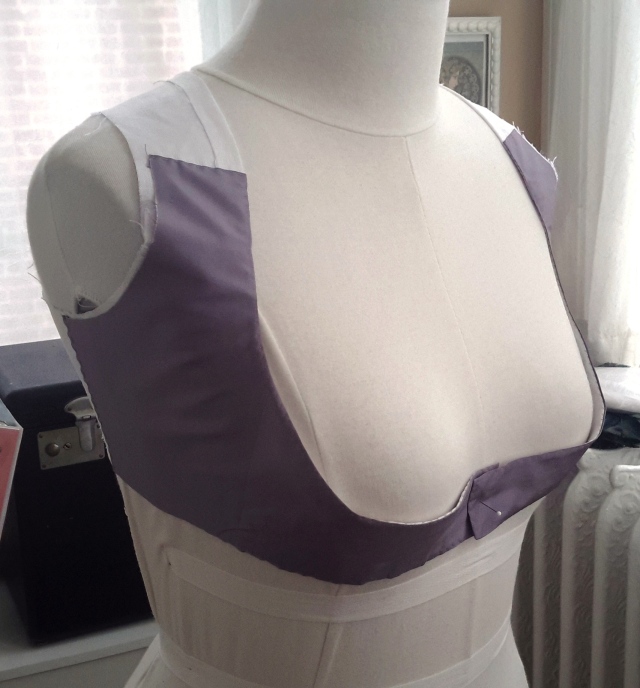 Since I’d done one (and in velvet) already, I figured a second (and in taffeta) would be a relatively quick and easy make. The only things I did differently the second time were to make it completely sleeveless and use the original fold/pleat lines along the robe fronts. One of these made things easier, the other significantly trickier. Any guesses as to which?

It was actually the sleeveless aspect that threw me this time. I hadn’t paid attention before that the bodice lining and outer fabric didn’t match-up around the armhole. This wasn’t a huge problem when sleeves were going in, but needing a clean finish around the armholes for sleeveless made this into a problem. It didn’t help that I clipped through the seam allowances to enable folding the fabric to the inside around the armholes. I had to do quite a bit of finagling and it’s still not 100% perfect, but I managed a decent job in the end – I think! 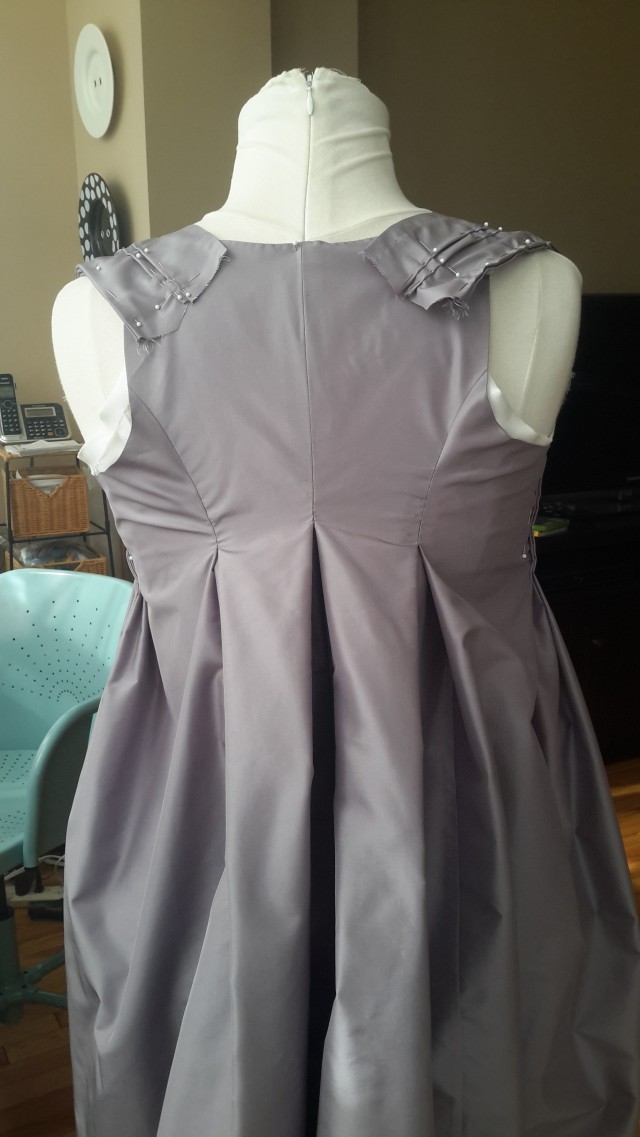 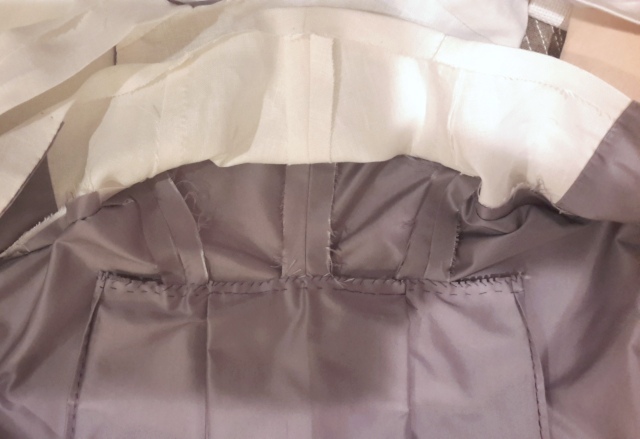 I wore this with nearly all the same other stuff I wore to the Twelfth Night ball in January, but the lavender taffeta created quite a different look from the dark blue velvet. I’m really not sure which I like better! And hooray for the beginnings of a Regency mix & match wardrobe! 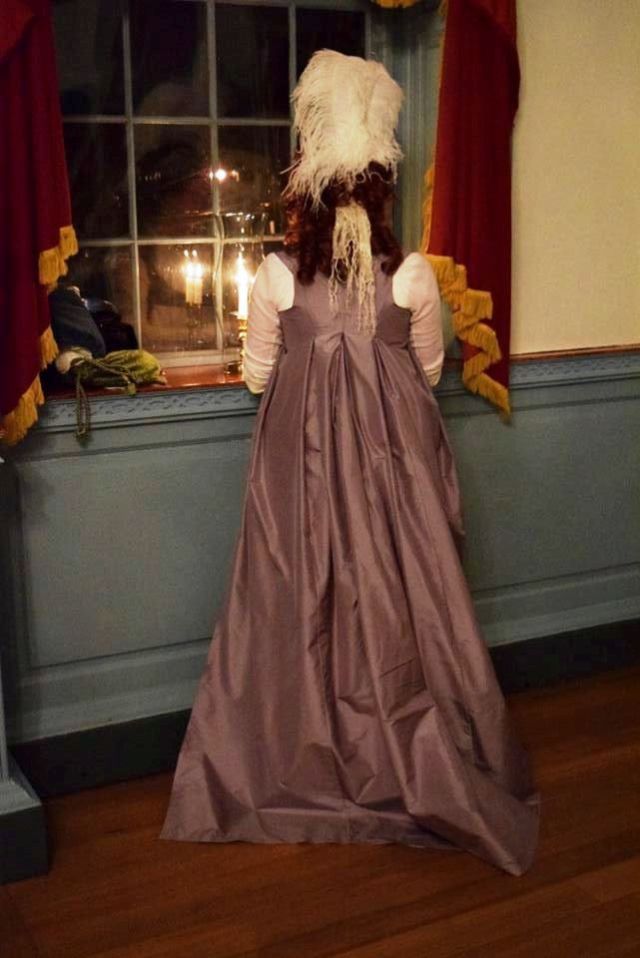 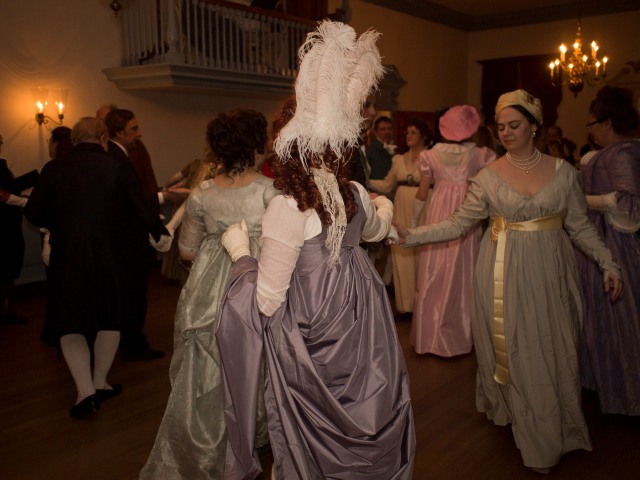 6 thoughts on “A Tale of Two Open Robes”