This is now so late that it’s almost redundant to post but for the sake of posterity I’m gonna post it anyway.

Also, I’m just gonna come right out and say it that I really sucked at taking photos at Costume College this year. I had all these grand plans of being so engaged, introducing myself to lots of new people and taking lots of photos of everyone. But I also taught 2 classes this year (my first time teaching at CoCo) and experienced some annoying technical difficulties with them. And the added stress of that was just enough to rob me of the extra mental energy this hardcore introvert needs to be socially outgoing. Ah well, lesson learned for next time!

So I’m afraid my CoCo post this year is really just a short trip through what I wore for the weekend’s events.

However, lots of other people put together great posts with lots of great pictures, such as:

In the Long Run

Please feel free to share more in the comments!

Now back to me. I was actually really excited about the costumes I put together for the main CoCo events of the Thursday Night Pool Party, the Friday Social and the Saturday Gala.

What’s more, I believe I came up with my ideas for all three events within a couple of days of this year’s theme (Dressing the Royals) being announced and I actually followed through on all of the them!

The Pool party kind of kicks off the weekend and tends to be a more low-key costume event as lots of people are just arriving.

So I figured this was a good night for my least fancy – but possibly most fun – costume: The Paper Bag Princess, based on the character from the Robert Munsch story. 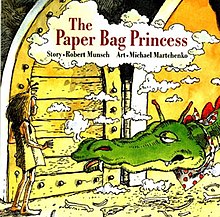 For my costume I followed this tutorial.

It did end up rather bigger and baggier than I’d ideally wanted – even after shortening my paper bag and taking it in at the sides – but it did the trick fine enough!

It was actually a lot of fun doing this (hey, I guess this counts as cosplay, right!?) because while a lot of people didn’t get it, those who did were super excited about it!

One of the great things about this costume is that it was really easy to take off and I didn’t have to re-pack it and take it home again, lol:

As of Friday morning I was back to my historical self:

I like doing regency during the day at CoCo because I get to dress-up but be really comfortable!

This is basically just a re-wear from the Jane Austen Fest with a shawl I got there as an extra accessory – and I love it with this outfit!

I’m very grateful to Lauren of Wearing History for getting this shot of me teaching my first ever Costume College class. I gave a lecture/tutorial on doing object-based research in museum collections, one of my very favourite activities!

My outfit that day was chosen to sort of go with my lecture as the sleeveless spencer/vest was the product of object-based study I performed at the DAR museum and I took the pattern directly off of the original. If you haven’t already seen it, my blog post about it is here.

I continued with Regency for the Friday Social with an English Regency court gown:

based on this fashion plate but with a somewhat more horizontal emphasis to better convey the weirdness of these fashions: 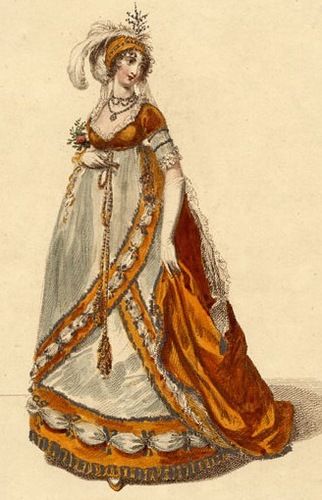 And I wasn’t alone! This may have been my first idea after hearing the theme for this year and I quickly discovered other minds went in the same direction! In the end, we were only 3 but I think we still made a decent impact, lol.

For daytime on Saturday I wore chemise gown I made back in the spring (dedicated blog post coming!)

And I taught my second class, Taylor of Dames a la Mode. We gave a lecture on the differences between fashions of 1774 and 1784, what I call the “mini fashion revolution” of the late 18th century before the big one of the 1790s.

That evening was the gala, where I premiered probably my biggest project of 2018 – a late 17th century mantua ensemble!

I’ve never done 17th century before so I had to start from scratch right down to a new set of stays.

I LOVED both making and wearing this outfit! It was so much fun entering into a completely new era for me, especially since it’s one I’ve been wanting to try for a while now.

This is possibly also the blingiest costume I’ve ever made, lol. I just couldn’t seem to stop adding more trim!

And I have several dedicated blog posts planned for this outfit, so look out for those if this period interests or intrigues you at all!

For Sunday I went back to regency with another re-wear from the Jane Austen fest, the Indian block printed cotton bib-front. But I can’t find a picture of me in it at CoCo, lol.