For the last couple of years I’ve become increasingly interested in the Natural Form period of fashion. If you’re unfamiliar with this transitional style of Victorian fashion you can check out my hodge-podge pinterest board on it to get an idea. I’ve been getting more interested in various transitional fashions, really, such 1790s and 1820s. With Natural Form I feel really drawn to the sumptuous use and cleverness of the fabric trims, the svelte contours of the figure, the sweeping trains. The more I’ve looked into it, the more I’ve noticed that Natural Form can actually be divided into two phases of approx. 1876-1879 and 1880-1882/3.

At the moment, I’m feeling more into the first phase of the aesthetic – loving all that asymmetrical drapery, knots and volume in the skirts! Yum!

Since making Tree last year, I’ve also gotten really enthusiastic about structured foundations so contrary to how it usually goes I was actually eager to build these pieces before starting on any pretty pretty dresses (but, oh, what I have planned!). These didn’t all happen at once, I made them between September and November 2014, with the chemise being finished early-mid January. I also made a new corset, but I think that deserves its own post!

A big shout-out goes to Jen Thompson of Festive Attyre for inspiring several of these pieces, and thus consequently the full set. She made a hip pad, hooped petticoat and flounced train to go under her Natural Form ballgown a year and bit ago. She presented comparison photos of the great difference the underpinnings made to the look of her dress, convincing me that if I wanted to start down the Natural Form rabbit hole I needed these first! Check out her great post here.

The first piece I’m showing, the chemise, is the most recently completed. I had started it first but it didn’t go well, so I left it for a while and came back to it this month for the first Historical Sew Monthly 2015 challenge, which is foundations.

It’s made using this pattern in Frances Grimble’s book, Fashions of the Gilded Age, Vol 1:

It’s made from this beautifully light and floaty cotton voile that I initially intended for a late 18th century fichu/handkerchief. That was some years ago, so it wasn’t a big wrench to change my mind and I love having so light and non-bulky under my corset! 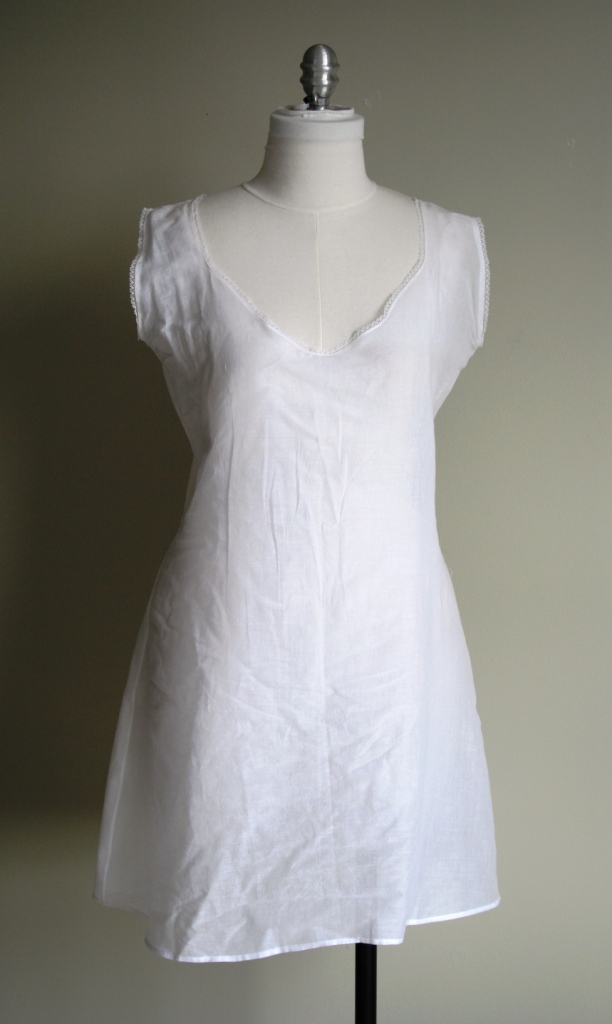 While it is finished, I’m not totally done with it. I’ve decided to change the lace trimming around neck and arms. I’m waiting on some vintage insertion lace to arrive that I’m going to sew to the chemise edges instead, and add the lace on it now to the edge of the insertion lace instead. 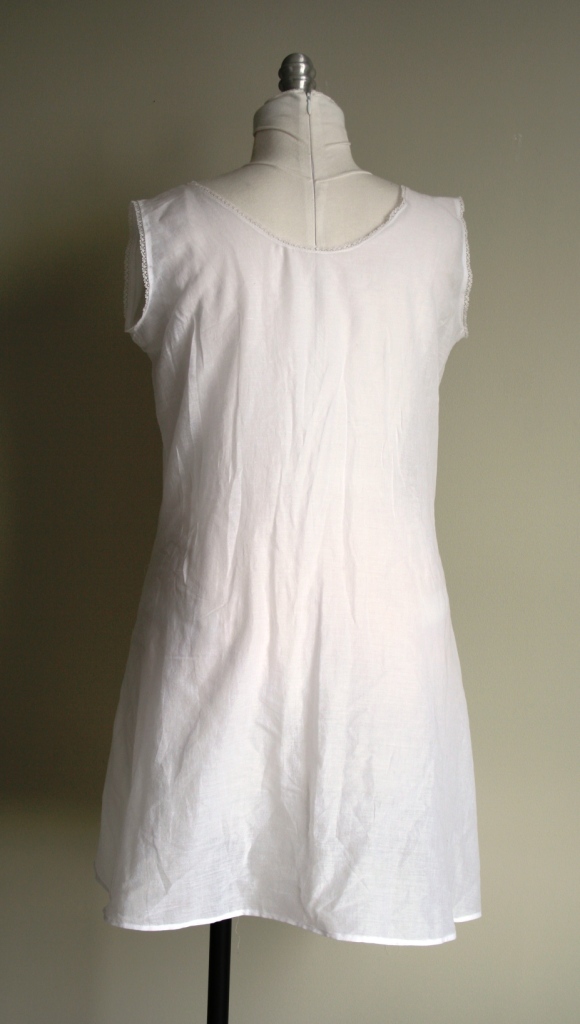 Next up are the drawers – also from Fashions of the Gilded Age:

And yes – they’re split! And I can personally attest that once you go split drawers you won’t go back! 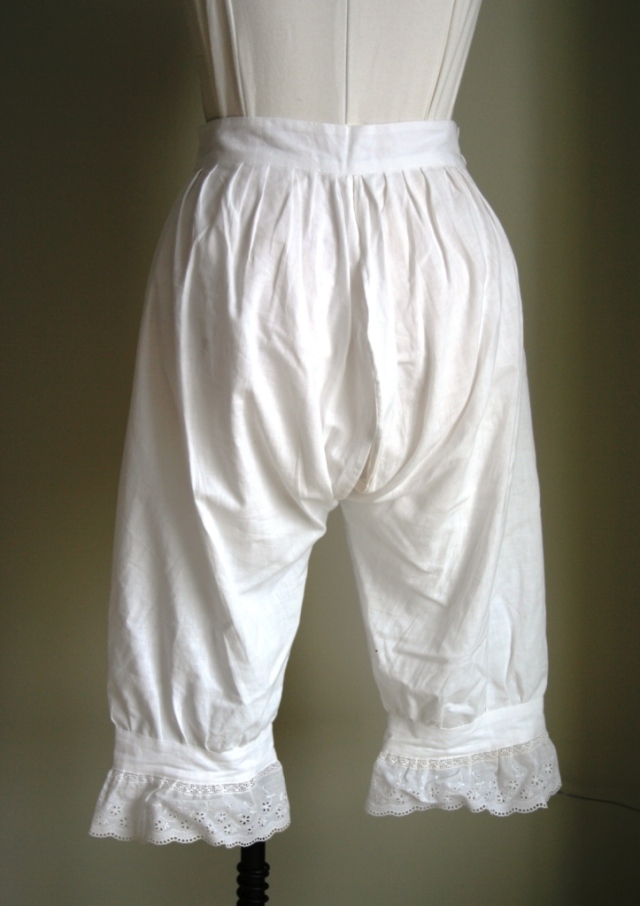 They’re made out of white cotton from an obliging Value Village-sourced bed sheet.

My favourite part of these are the two vintage/antique cloth-covered buttons from my button stash that I used for fastening at the side. 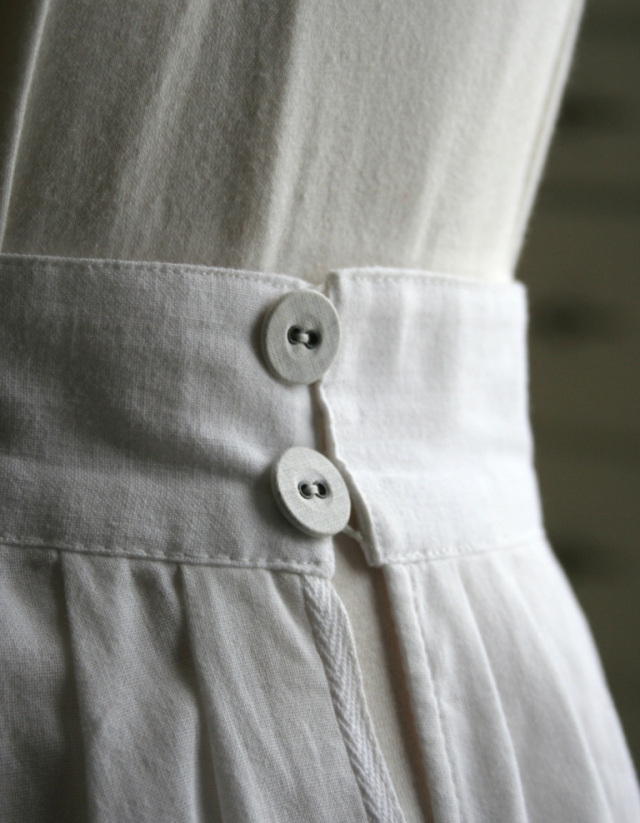 I made a new petticoat specifically for the period too using TV121 (now discontinued, replaced by TV125)

For this I used white cotton pillow-ticking. I wanted something fairly lightweight but still crisp, which ticking’s tight weave amply provides.

The petticoat itself is full length with the bottom flounce applied to it. While I really like the extra bit of body and substance this provides, the hem is forever getting caught up underneath when I put it on.

Underneath the petticoat are two nifty types of support!

First is the hoopskirt, again from Fashions of the Gilded Age (this has been a very helpful book!)

This was the piece that kind of inspired the whole lot of these underpinnings. I thought it was just fascinating when I saw Jen Thompson’s version!

Mine is made from white cotton twill canvas that I had in my stash. The adjustable straps and the waistband are cotton twill tape, doubled up. Those are safety pins you see below the buckles. The buckles I got aren’t quite toothy enough to hold the straps when you start adding layers over top of the petticoat so until I address that the safety pins keep everything in place. I’m not too bothered by it at the moment, still just too excited about making this! 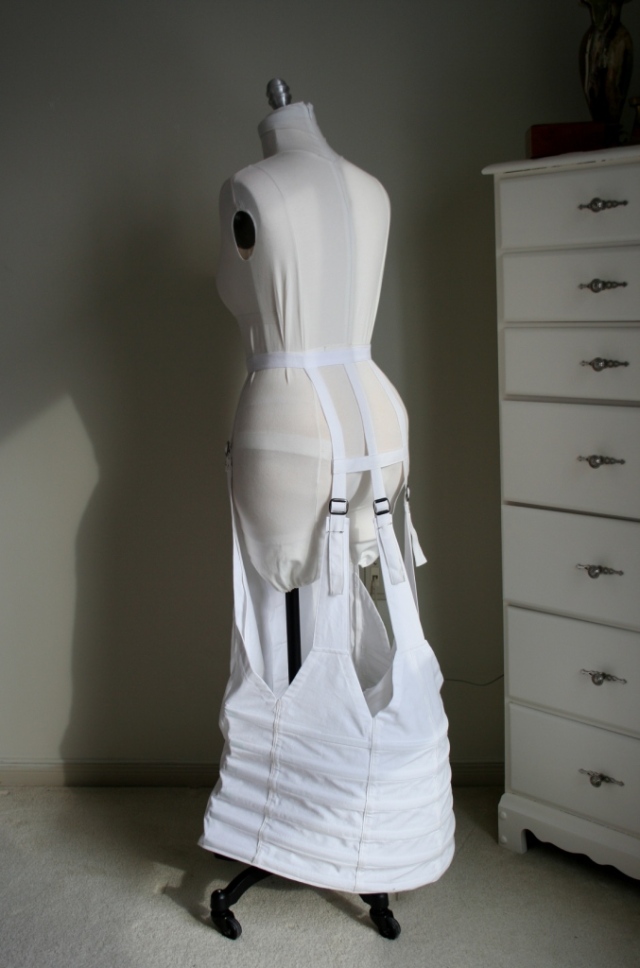 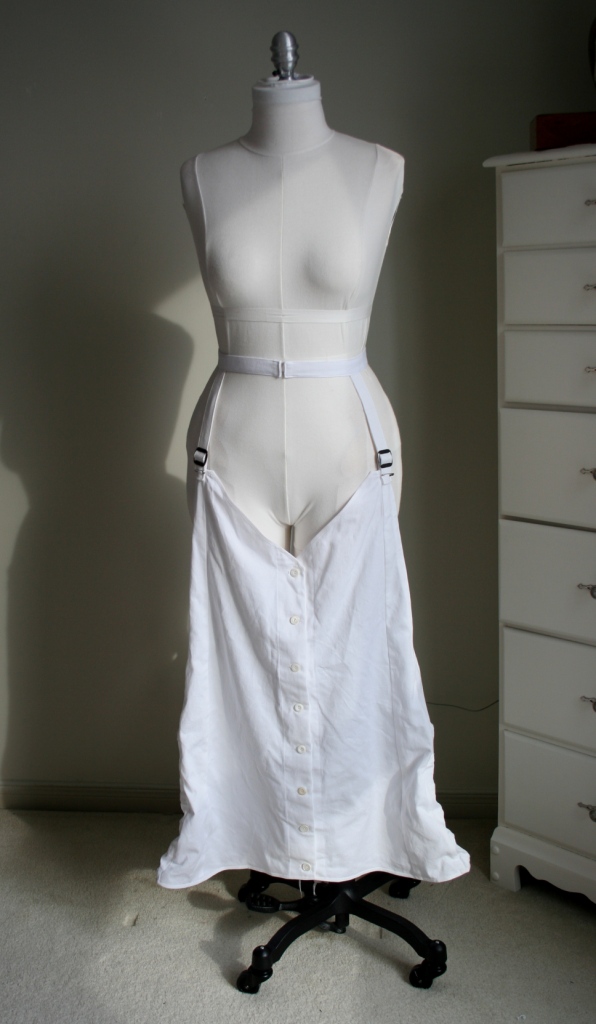 In addition to also leaving off the front vents I followed Jen’s example by making the inner panel lace-up so it can be more adjustable. 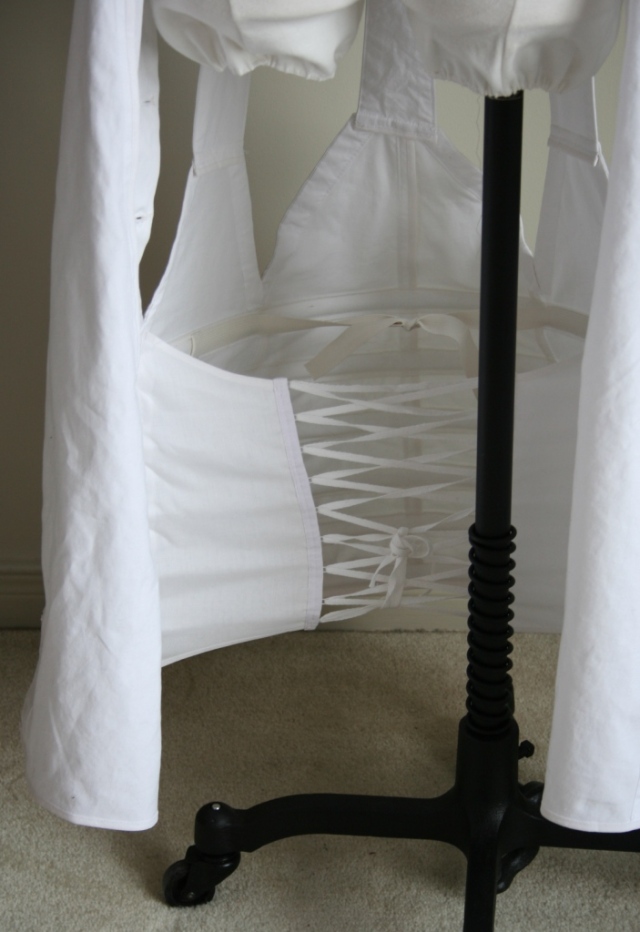 One note about the placement of that panel – if you ever decide to make one of these you may want to situate more forward than the pattern indicates. The way I read the pattern (possibly incorrectly) is that the panel should be placed at the first set of seams beside centre back. I did this initially and found it didn’t give the right shape. I removed it, then decided to split it in half and have it lace-up, and moved it to the next set of seams. This did the trick!

The second support is a small bustle pad – which I think is the cutest piece of the bunch!

I didn’t use a pattern for this one, but took inspiration from these two original examples:

This one is at the MET

My reference here is the one on the far left. These are at LACMA.

My primary reference was the first one, but with fewer tiers and less controlled box pleats similar to the second one.

This doesn’t add a lot at the rear, just that extra little bit you need for the Natural Form silhouette.

The base is more white cotton sheet a la Valoo Villahge, the ruffles are hair canvas (the kind typically used in tailoring), the binding is vintage cotton bias binding and the ties are narrow cotton twill tape. I really love this thing and do a little squee every time look at it! lol

The final, and prettiest, component is the ruffled train, also from Fashions of the Gilded Age: 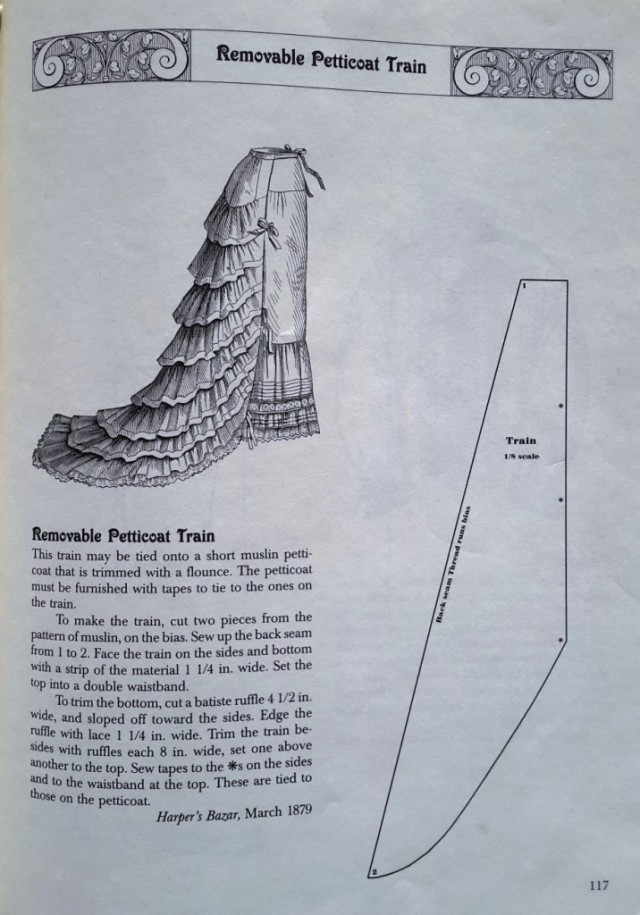 Ahem. It’s made from more of the white cotton pillow ticking that I used for the petticoat – to which it is also mounted.

To be honest, if I were to do this again I wouldn’t use the ticking for the ruffles. While it’s perfect for the base, using it for the ruffles makes it rather heavy and I fear it causes more drag than is ideal. I’d use cotton voile or lawn instead. This one is still definitely useful (and beautiful!) but will work best under the really narrow skirts of 1880-1882 than the fuller ones of 1876-1879.

I used some scraps of the cotton sheet to bind the edges (all the rest of the ticking was used up on ruffles!) and added buttons to the sides of the petticoat and thread loops to the train to keep it in place. I think I’ll add one or two sets more for added stability and security. The buttons also need to be replaced with shell ones. 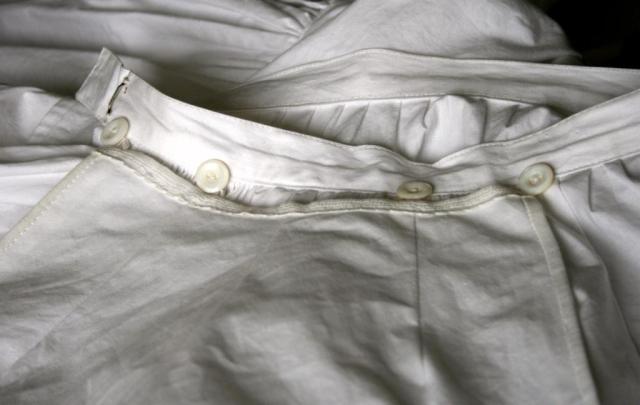 So here’s the whole shebang put together. It’s not a dramatic look, but will really give a sense of substance underneath my upcoming Natural Form dresses (one of which is currently in the works!)

I’ll try to get a picture of my in all of it as part of my corset post. 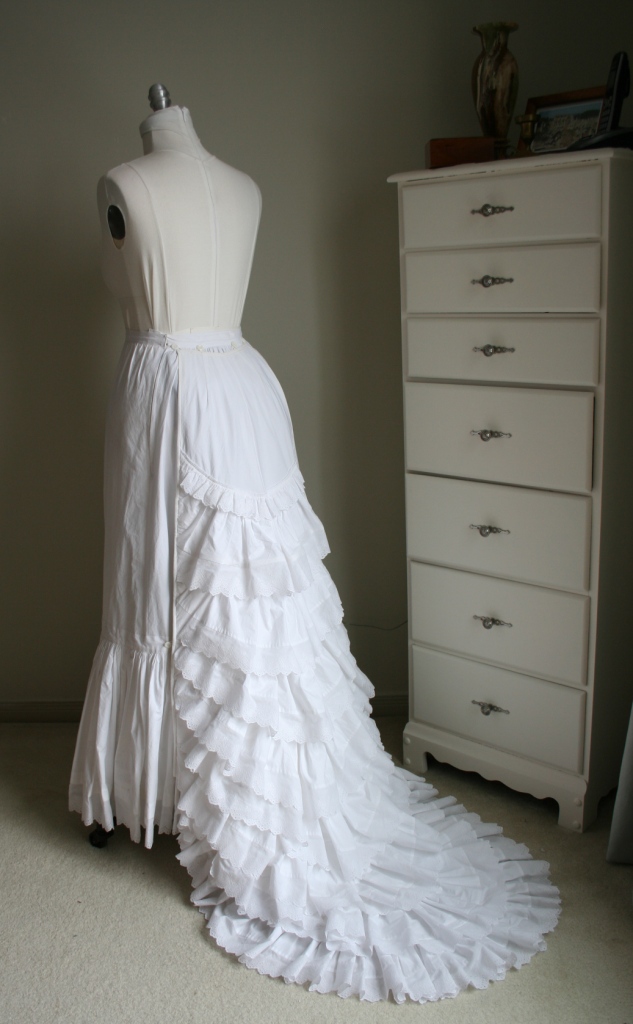 How do you feel about making foundation garments (historical or modern)? Love ’em? Hate ’em and can’t wait to get to the good stuff?