So, I’d been hankering after a pierrot jacket for a while now. These are the super cute 1780s-90s little jackets with floofy tails/peplums at the back: 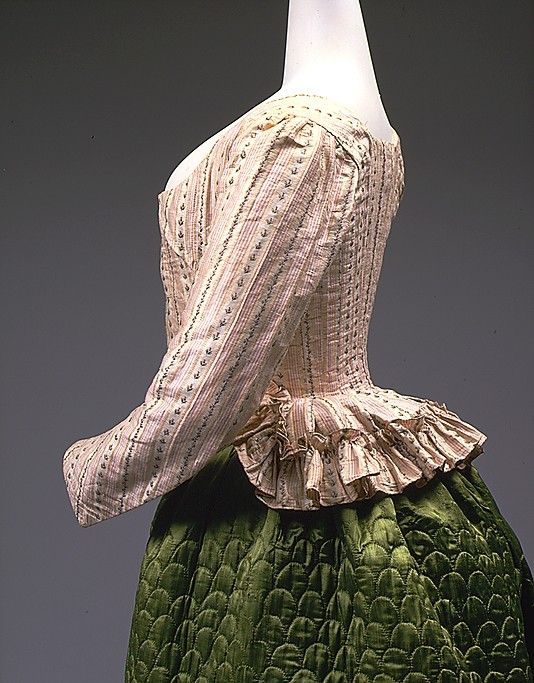 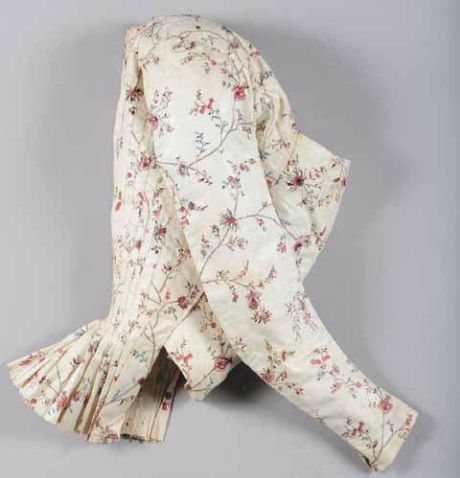 They don’t always have a cutaway front but I do particularly like that style. 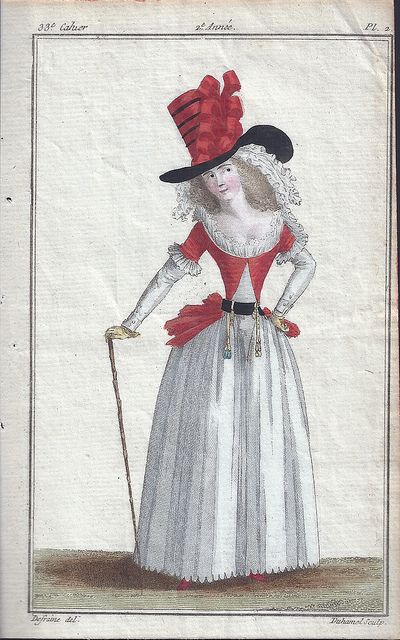 I think I could probably date this desire back to when Lauren of American Duchess made this delightful jacket and ensemble a few years ago: 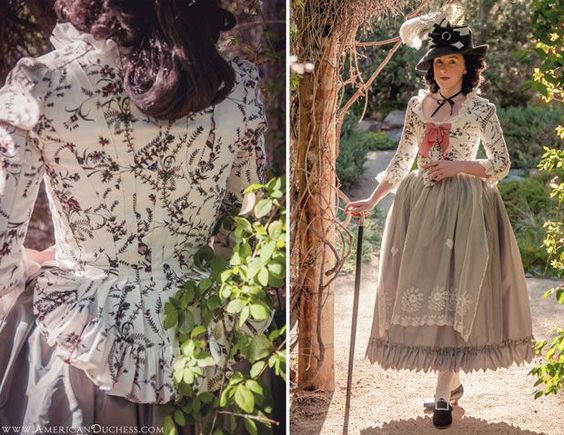 I was finally able to slot it into the sewing queue this spring and made it to wear to a Georgian picnic in Philadelphia in early May. A couple of years ago I’d bought a really pretty printed cotton from Reproduction Fabrics to make a late 18th century jacket so I was also really happy to finally be able to use it!

I started off by making the lining for the body of the jacket. For this I just used the bodice lining pattern from my Italian and Cutaway Front Anglaise gowns. Incidentally, this is one of the really great things about women’s fashions of the 4th quarter of the 18th century – your basic gown bodice lining pattern works for so many styles and garments, and not just for the lining but providing the base on which to make/drape/mount your “fashion” fabric. It enables you to get started on your gown or jacket really quickly and makes the whole process so straightforward!

The first steps with my printed cotton were to cut 2 panels of fabric to a generously guesstimated length of the jacket back and sew the centre back seam.

Here’s an overall view of that:

Then I trimmed away the excess from the centre back seam to make the bottom box pleat more manageable.

I formed the inverted box pleat……..

I eventually settled on a set of measurements for my pleats – something like 1″ deep at the top, angled to 1 1/2″ deep at the waist, spaced 1 1/2″ apart at the top, narrowing to 1/2″ spaced at the waist. I did it this way rather than just all by eye for the sake of consistency and actually also ease – it made it go quicker by drawing out dashed lines for each pleat according to set distances than trying to visually gauge them. Sometimes I like doing things by eye, sometimes I like measurements!

You can just see some of my dashed lines in purple in the photo below:

I kept pleating until I got to the kind of width I wanted for the back peplum/tail, which turned out to be 6 pleats on each side.

I roughly cut the fabric to shape…..

then stitched the pleats down to the lining with spaced back stitches worked close to the pleat folds.

Once that was done I refined the cut of the fabric.

This included folding under and finishing the neckline

Next I narrow-hemmed the back peplum/tail with small running stitches.

The upper portion of the cutaway front is one piece with the back. To create it I simply pinned the printed cotton to the bodice lining and trimmed away around the lining edges. I left a fairly wide allowance for the actual cutaway front line so I had wiggle room for exactly where that line would end up. To make the lower portion of the front I again pinned a piece of the printed cotton down to the lining and cut away around the edges, in both cases using the lining as my pattern piece.

I folded the edges under and finished them with small, spaced whip stitches worked from the underside.

Here’s how it looked so far:

For ease of sewing I try to do as much of it with the garment still basically flat (aka, before adding the shoulder straps and sleeves), so next I made the ruffled trim for the back peplum/tail.

I cut strips of the printed cotton just over 2″ wide and to a fullness of approx 2x the distance all the way around the peplum. I gathered along the middle with running stitches, If there’s a next time I might cut the trim a little wider and do whip gathers instead both for stability and I think it would increase the fluffiness of it.

Then I just tacked it to the peplum with running stitches. At some future point I should probably go back over these with spaced back stitches, which would be more secure.

I was finally ready to add the shoulder straps, linen lining layer first then applying the printed cotton over top.

I’m afraid the final stages of construction are very skint photos-wise since (as usual) I was starting to run up against the deadline for the event – and with a hat still to make, lol! So the only photo from making the sleeves is the one below. I used the same sleeve pattern that I developed for my rust & ecru silk striped 1790s open robe and then used again for the mint wool redingote. I constructed it using basically the same method I did on the redingote but even easier and faster this time thanks to the American Duchess 18th century dressmaking guide (specifically, the 1790s sleeve they make).

I included the photo below for the sake of humility. Lest you think I just throw all of these things together without any snags…….AHAHAHAHAHAHAHA. Even though I did a muslin mock-up of the sleeve before cutting my printed cotton (of which I had limited yardage) I still had to futz with the fit multiple times. Luckily it was a case of taking in rather than needing to let out but I still had to re-do the outer/back seam of my 2-piece sleeves at least 3 times before I liked the fit!! You can see the multiple rows of stitching along the bottom edge of the sleeve in the picture:

Oh, and that’s not even the worst of it! I also mounted the sleeves to the jacket somewhat askew so that they didn’t fit properly on the bodice. How did this happen? Because, although I’d made a mock-up of the sleeve and tried that on while trying on the jacket I didn’t actually baste the sleeve into the jacket for trying on, thinking that I could sort it out just by eye. Well, pride sure goeth before the fall and all that! I verged on panic when I first tried on the jacket with the sleeves because it just would. not. stay on my shoulders. I feared I’d trimmed too much off the sleeve heads and I was going to have to try and piece new sleeve heads on and I got really upset and mad at myself about it. So the jacket sat in the naughty corner for a couple of days while I mulled this over.

Something made me decide to try re-distributing the sleeve head fullness and see what effect that had. Lo and behold it made a big difference and I was flooded with relief when I realized I just had the sleeves improperly oriented in the armhole!

So – please learn from my silly mistake and save yourself heartache and panic by actually basting your sleeves into your garment when you’re going to fit them.

I used the day of the re-shoot of my recent alteration project gown for doing a full-ish fitting and trial-run with hair and some accessories:

I decided I wasn’t super keen on the length of the back peplum/tail. I felt it was a little on the long side for me. I hummed and hahhed over it for a bit, asked people’s opinion on Instagram and finally decided to shorten it by an inch. This is where just using running stitches for sewing this part did pay off as it was easy both to the remove the ruffled trim and re-hem the tail 1″ shorter.

Oh, and funnily enough, the apron was the first part of this ensemble to be made! I fell in love with it when I saw it in the American Duchess book and took the opportunity to use it for a stroke gathers project at a weekend sewing workshop I attended back in February. Ultimately, I was not a big fan of stroke gathers but I do love how this apron turned out!

I’m afraid I took no photos of the hat construction because of time but the process was nearly identical to the larger tall crown hat I made to wear with my wool redingote. The main differences are the size and that the crown tapers a little. I actually based it directly off of A Fractured Fairytale’s hat that she made to go with her delicious pierrot jacket ensemble, going so far as to ask her for the measurements of her hat, which she obligingly sent me. Hooray for sewing friends!

As mentioned at the start of this post, the jacket got its debut wearing at a Georgian picnic with costuming friends at Historic Strawberry Mansion in Philadelphia.

To finish it off I added a narrow cotton lace ruffle to the inside edge of the neckline and did the same for the sleeve ends; I also tacked on my ivory silk/cotton voile neckline ruffle that’s made to be moved from gown to gown – it’s been on the cutaway front anglaise and the 1780s version of the alteration project gown before this.

I had initially intended to trim the hat with pink ribbon but found this brown picot edge in my stash and really liked the  contrast with the pink so I ran with it! And I happily also had a pre-made brown ribbon bow in the stash that was perfect for a breast knot! Hooray for finding just the right stuff in the stash, my hoarding is totally justified!

Most of the other attendees were dressed in later 1790s-early 1800s fashions so I did feel a little weird and out of place amongst them but I was so determined to give my new jacket a wearing that I went ahead with it anyway – and it was a lot of fun to wear!

We did actually have something of a range of time periods, so took a couple chronological group shots.

We were also able to take a tour of the mansion and I actually ended up matching one of the rooms! Lol

Like seriously, I literally blended into the furniture, lol!

I really enjoyed making this jacket – apart from the whole sleeve debacle – and in poring over fashion plates of pierrot jacket ensembles have already decided what my next one will be – when/if I can ever squeeze it into the sewing queue.

I am now just obsessed with this white and lavender number! And I have almost everything I need for it already in the stash! I just need to figure out how to make my peplum actually stick up like that! Lol 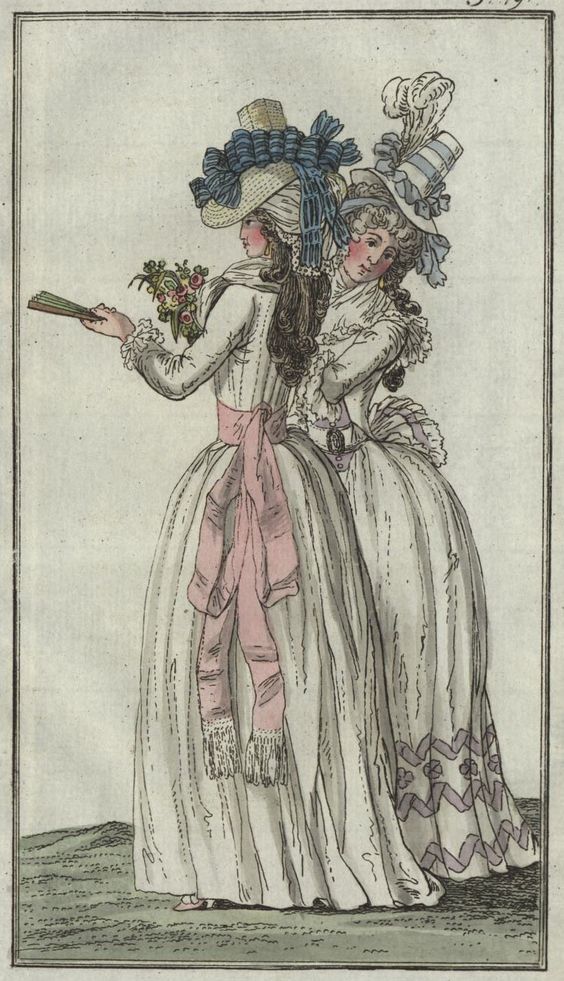 Has this ever happened to you? That in the course of researching for one outfit you get completely taken by another? Or perhaps I should ask does this happen to you all the time? Lol