This hat was based pretty directly off of this 1780s fashion plate: 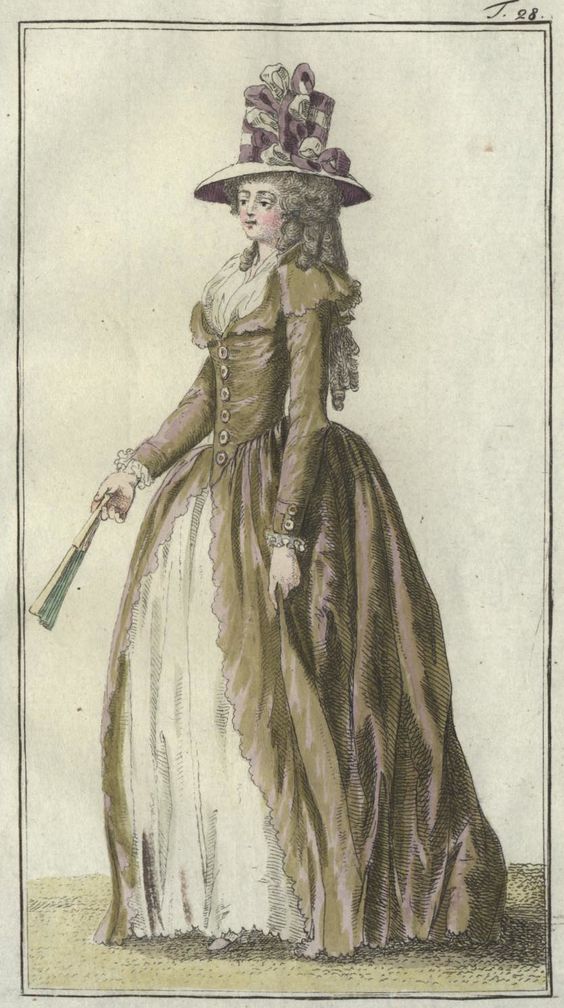 I was really taken with the alternating colours of the ribbons and stripes.

And there seem to have been quite a lot of variations of the style going around: 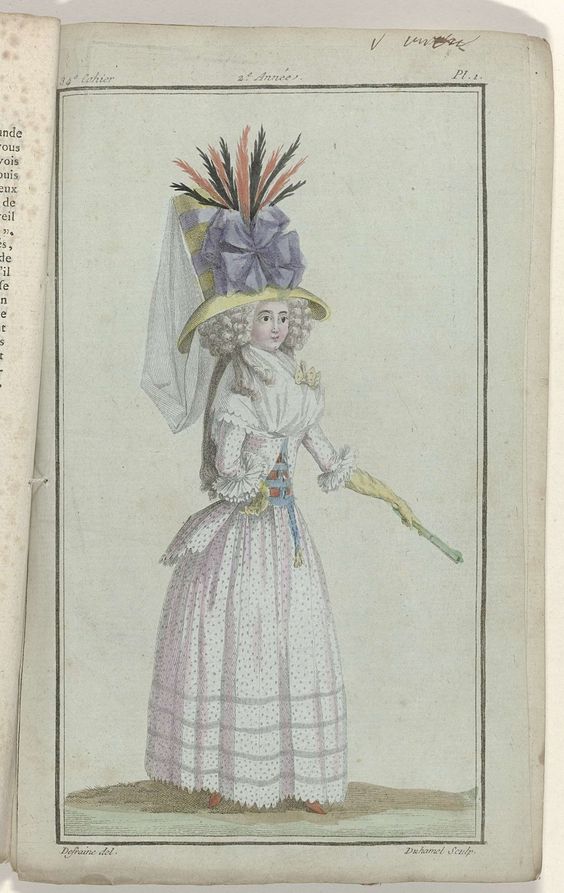 (I’m currently considering re-working the trimming of mine to something more like the one above – lookit that HUGE BOW!!!) 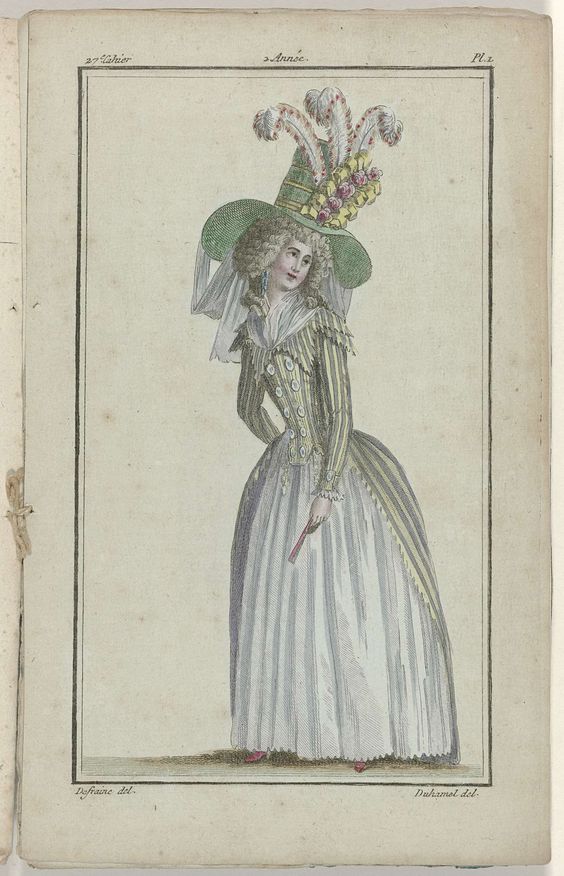 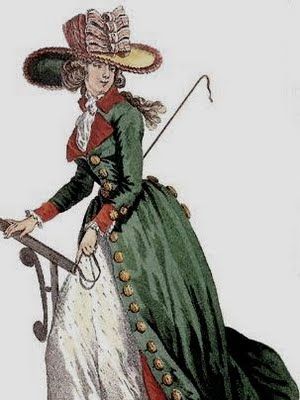 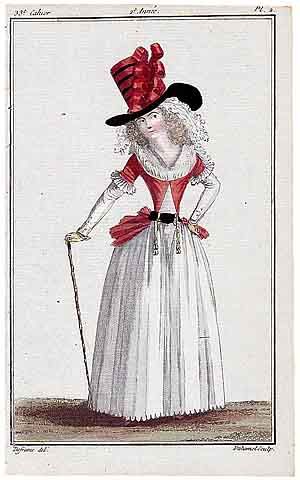 This is a pretty easy pattern to configure, being all circles and rectangles. I started by determining what diameter I wanted for the brim, then how big a head opening, then how tall I wanted the crown. It was fairly easy math to get the pattern after that.

Next I mulled the underside of the crown top with cotton flannelette (yes, it’s stained, this was a remnant I picked up at a swap and didn’t care cause it won’t show!)

Why did I start with the underside of the crown top? I wanted to try out a way of getting a cleanly finished interior. Hopefully the following photos will this make more sense.

I then mulled the upper side of the crown top.

And next covered the interior of the crown. This really seems like a weird order, doesn’t it?

Then I joined the crown top to the crown with whip stitching. In this way, the interior of the hat is now nearly all finished and the edges get covered by the exterior fabric – except for the bottom edge, as you’ll see.

Then I mulled the crown exterior

and covered the crown top:

At this point I switched over to the brim. I didn’t have enough flannelette left for mulling the brim so I used a sort of brushed cotton twill kicking around in the stash. Not ideal but it was certainly better than nothing! I applied this to both sides of the brim.

Again, I started by covering the underside then applying the upperside and carefully folding under the seam allowance – leaving the head holes uncut for now so as to get the best tension across the surfaces.

The two layers of silk are slip-stitched together around the perimeter. This was a PITA because this silk taffeta happens to be very tightly woven and on the thicker side – it did not like letting needles through!

A close-up of the stitching:

Then it was time to go back to the crown and cover it:

I decided to start adding the trimming bands to the crown before attaching the brim so as to make an easier job of it. The aqua silk satin bands are just tacked in a few places around the crown to maintain a smooth, floating sort of appearance.

For even placement of the middle band I measured and drew a line around the brim for aligning the upper edge of the band.

Once the upper 2 bands were on it was time to attach the crown to the brim. You can also see here how I’d turned the crown covering to the inside and basted it through all layers while leaving the lining free. You’ll see why shortly. Oh, and also note that I had run a line of basting around the wired inner circle (head opening) of the brim to anchor the fabric for cutting. I then clipped the head opening seam allowance all the way around at approx 1/2″ intervals.

Here’s what it looks like from the outside. I did it this way because I knew the bottom of the brim would be covered by a third trimming band. If you weren’t going to have trimming there you’d want to leave the lower edge of the crown covering free until after you’d attached brim to crown and then turn that under and stitch it down in whatever way you think would look nice – does that make sense?

The  construction was finished off by turning under the bottom edge of the crown lining and stitching it to the opening edge of the brim:

I trimmed the hat with “ribbons” made from the main hat fabric and more of the light aqua silk satin I used for the bands around the crown.

I’m not sure I’m 100% happy with how this worked out but it did look good with the ensemble as a whole. Still, I’ll probably try re-doing the trimming at some point. That fashion plate I mentioned above with the huge bow in front is looking more and more tempting!

To finish off, I decided I did not want to try and fight with getting a hatpin through this to hold it on and so added ribbons to tie underneath the hedgehog wig. They managed to get buried in and under the hair so that they were nearly invisible (I think) and my hat stayed on securely! I think I may try to do this from now on whenever I can. I can’t get the memory out of my head of once gouging myself with a hatpin trying to get it through a hat.

And now I think that’s it for this project!