This is a short and sweet post on the hat I made at the last minute to go with my recent striped silk mid-1790s open robe.

The main inspiration for the hat was this Gallery of Fashion plate from 1795, specifically Fig 74. 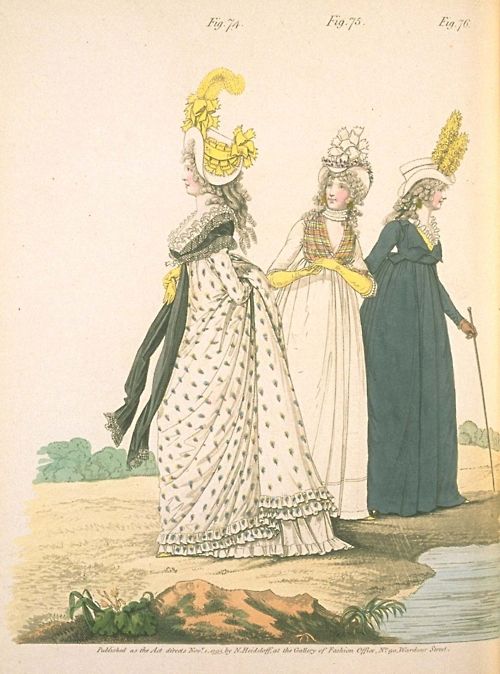 However, since I was super tight for time I didn’t want to go through building a whole proper rigid crown of buckram and wire so did that only for the brim and made it a soft-crowned hat rather like the upper lady’s in the fashion plate below: 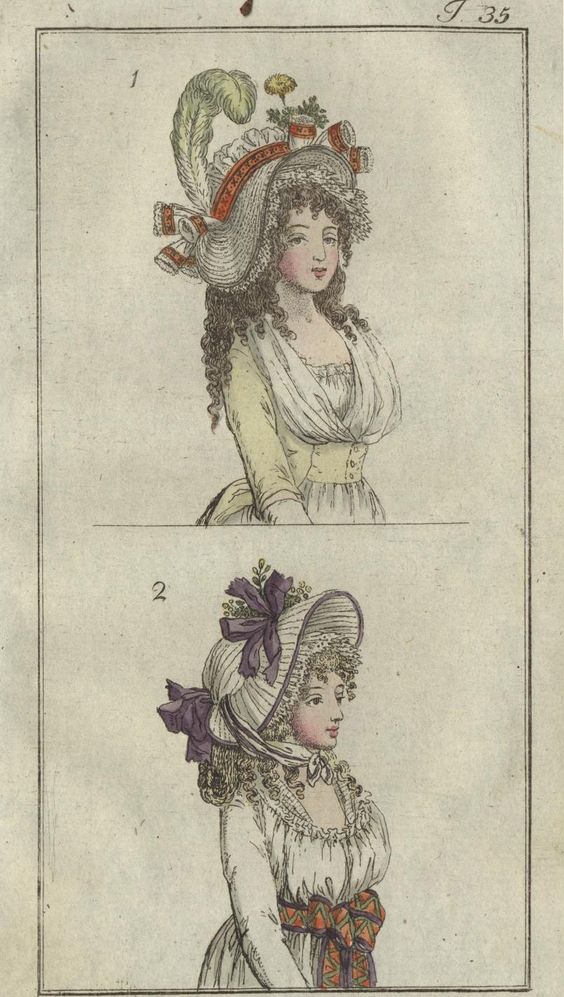 Because of the time crunch I also didn’t take any in-progress photos so I’ll do my best to explain how I made this with photos of the finished hat.

I started off with the brim, which is a circle of buckram with opening for the head positioned a little off-centre so that the brim edge of the front would be a little bigger/longer than that of the back – the effect of which you can see in the profile shot above.

To cover the brim I cut 2 rectangles of fabric whose length corresponded with the brim circumference. I covered the underside of the brim first, basting the fabric around the edge of the brim and then gathering it up around the head opening.

I did basically the same thing to cover the top of the brim, except that I stitched it around the brim edge right sides together with the underside fabric, then folded it over onto the top to create a sort of self-bound edge – a super easy and quick way to cleanly finish the brim edge of a hat, I love this technique!

The crown is a circle of fabric cut to about the same size as the brim. I underlined it with some heavy-ish cotton organdy, gathered the circumference to fit the head opening treating both layers as one, and stitched it around said head opening.

I had hoped to be able to just fold under the inner edge of the under brim covering to create a clean finish inside the head opening but when cutting that fabric I forgot that the brim was not a consistent size all around and was left with a gap between the edge of the fabric and the crown at the front of the hat. So I hastily made a bias binding to cover everything up!

Then it was on to trimming!

I used a really neat changeable taffeta ribbon I got from my friend Taylor (Dames a la Mode) and this is where I relied heavily upon the first fashion plate above for inspiration.

I cut a whole pile of fairly shot lengths of ribbon to make the loops and tails, just pinned most of them to the hat (I was in such a rush!) then covered it with a length all round the base of the crown.

I made the front and back bows with more of these short-ish lengths and just stacked and stitched them together – these are actually sewn to the hat, lol.

The feather is not quite as secure as I would like – it swings about if there’s any wind – but I didn’t have a lot to attach it to. It’s sewn up along the back of the brim and also to the base of the crown through both layers. But at least it won’t actually come off!

And there you have it!

So how many of you have hats or whatever still with pins holding trims or such onto them? ;o)