Well, I did it! I’ve now made everything that was on my historical sewing list for 2017 – and I still have a couple months to cram in a few more makes, ha! This dress was the last on the list and was made for my recent Big Bustle Birthday Bash. And last week I was able to do a dedicated photoshoot of it courtesy of Taylor of Dames a la Mode.

The initial inspiration for this dress came from the plaid silk that’s been in the stash for about 5 years, give or take. The design specifics ended up coming from a combination of a couple of 1875 fashion plates: 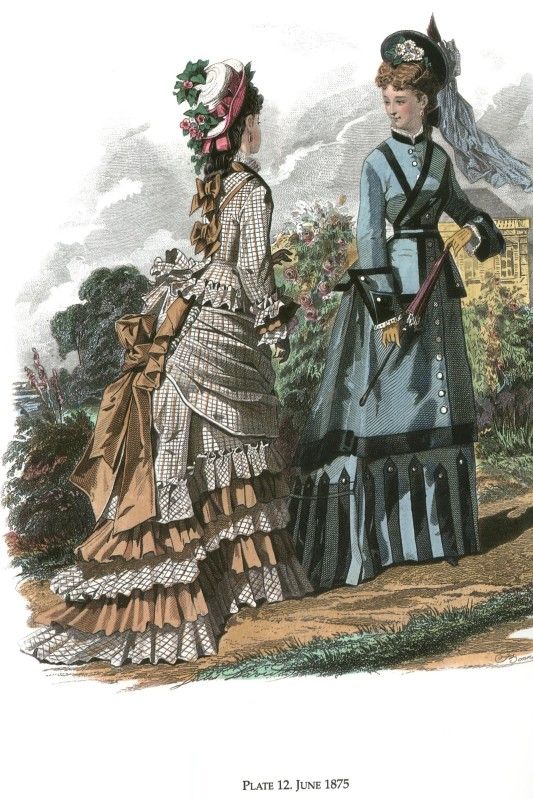 I chose 1875 as I knew I wanted something ruffley – like on 1870s Natural Form fashions – but still bustle-y. 1875 seems to be the year right at the transition from big bustles to the Natural Form shape of 1876-1883 and with ALL the ruffles!

The pattern for the base skirt is taken from the early 1870s dress draft in Patterns of Fashion, the apron is modified from the Wash Overskirt from Truly Victorian patterns, and the bodice is actually adapted from the Truly Victorian Tea Gown pattern!

Most of the materials came from stash. I had initially planned to accent the plaid silk with a rust/terracotta silk charmeuse also in stash but ended up liking this dark rust cotton velvet with it much better instead.

I had over 11m of that plaid silk and used up almost all of it on this dress – those skirt ruffles were a totally fabric hog, being cut on the bias as they were! – I only have scrap bits of the fabric left. But I’m actually really happy with this because it used up so much stash yardage. Woot! And I used up every bit of the 1.2m of rust velvet I had. The bit of rust silk taffeta you see in the butt-bow was a scrap piece of stash – a large fabric sample I bought at a fabric yardsale at the Textile Museum of Canada several years ago.

The only bits I bought for this outfit were the vintage satin ribbon and velvet grape cluster – both on the hat – and the pompom trim I added to the apron and butt-bow after the party (because it didn’t arrive in time).

So all in all, this was a great stash-busting project!

We did the photoshoot in Lincoln Park, just down the street from my house. Capitol Hill is just full of historic row houses and so the Park is lined all around by them. Of course, there are cars and bits of modern stuff all over the place but we did manage to find one aspect free of those:

And I just love being able to have a period house in the background of a few of these!

One of the reasons I like this particular period of Victorian fashion so much is because you have the option of a bit of a V-neck, if you want – even for daywear! I hate having tight collars right around my neck and they don’t do much for me, aesthetically-speaking, so I go for V-necks whenever I can, however modest!

Taylor got some nice detail shots so you can see individual features up close:

The one bit I’m not super happy with is the bottom centre back of the bodice. I was going for the split-back feature on the second fashion plate but I didn’t manage to make it work quite well enough. Oh well, live and learn!

I think I sense a new FB profile picture here:

And the shoot would not be complete without including a shot of my new American Duchess Collette Boots! These are seriously just too beautiful!

Next up will be a post about construction of this ensemble. Is there anything in particular you’d like to know about/have me include?