A quick re-cap of the original dress/pattern in Patterns of Fashion and how I modified it:

the original dress has a box-pleated skirt but I wanted the tight, narrow knife pleats so common for this period.

(Also, here are links to my posts on making the bodice and petticoat)

So I used the skirt pattern from another dress in Patterns of Fashion as a rough guide.

Although I still did things a little differently from either. I cut my skirt as two full-width panels of my fabric with a little bit of a train at the back but completely straight along the top. Instead of cutting the waist edge with a curve I just sewed it with one – you’ll see what I mean in a moment.

To make the skirt I seamed up along the centre back with small running stitches, leaving a 2″ long opening at the top that would be part of achieving that curved waist seam. I hemmed it the same way as the petticoat and finished the front edges of the skirt similarly, only with a 1/4″ finished “hem.”

To make the pleats I just eyeballed them to be approximately 1/4″ wide on the right side and (very roughly) 3/4″-1″ on the underside.

I used my longest, sturdiest pins for this to hold all the pleats securely in place.

(as you can see, I did not actually construct the dress in quite the same order I’m blogging about it).

I was pretty pleased, I have to say. And it did give me an idea that this look, with a sleeveless bodice, might make for a rather nice evening gown…..hmmmm. 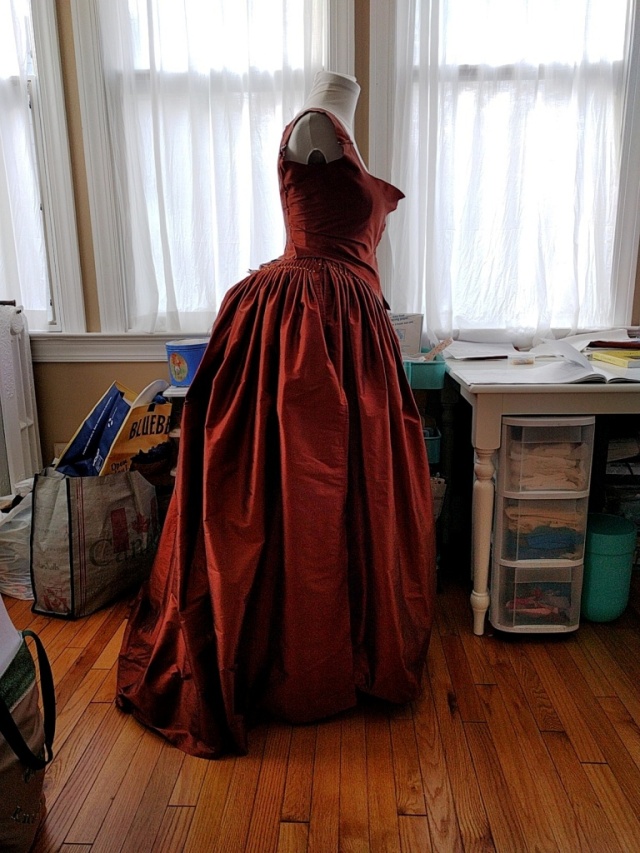 Before I took the leap of sewing to skirt to the bodice I made and applied the trimming. Which involved cutting out SO MANY strips of the fabric (2″ wide) in a particularly annoying way.

It was because I was using the scalloped pinking shears rather than the more usual zigzag ones (again, here’s a link to scalloped pinking shears on etsy); this means they’re directional so I had to cut each side of a strip individually with a small space in between them and also switch cutting directions for each side (awkward) – oh, and just to make things even harder on myself I manually cut the strips in scallops (totally eyeballed, totally uneven but once pleated totally unnoticeable). This happened in batches. I cut enough strips for one part of trimming, pleated and applied it, then cut strips for the next part. 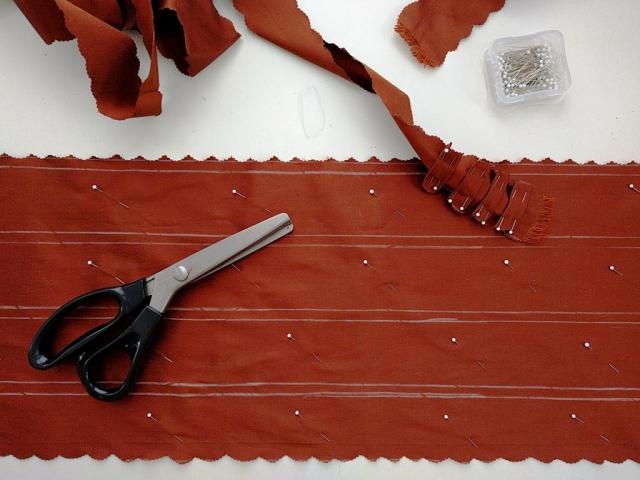 I fully trimmed one side of the skirt (so I could see the overall effect sooner) then the other. The first part was the strip down the front edge then the angled one to create the borders for the curved piece. 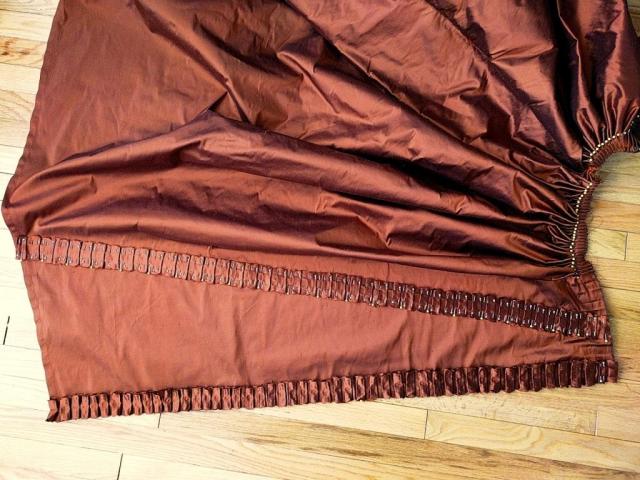 There is a slight inconsistency between Janet Arnold’s sketch of the trim on the figure and on the pattern – it’s all scalloped on the figure (so much scalloping on this dress!!!) but partially serpentine on the pattern. I don’t know if the dress is inconsistent between the two sides or what, but I decided to go all scallop (because by this point, of course I did). I did notice that after I’d laid down and pinned my trim it wasn’t spaced the same as the original. I briefly thought of re-arranging it and decided “sod that, it’s fine as it is.” 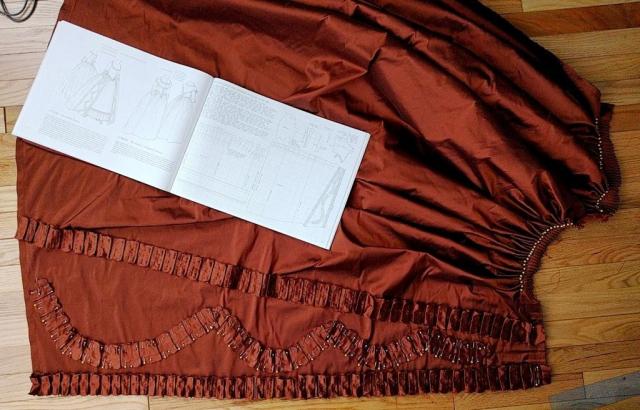 A detail of the pinning; the strips were tacked with backstitches tiny on the outside and long on the underside. Each pleat has two tacks in it. 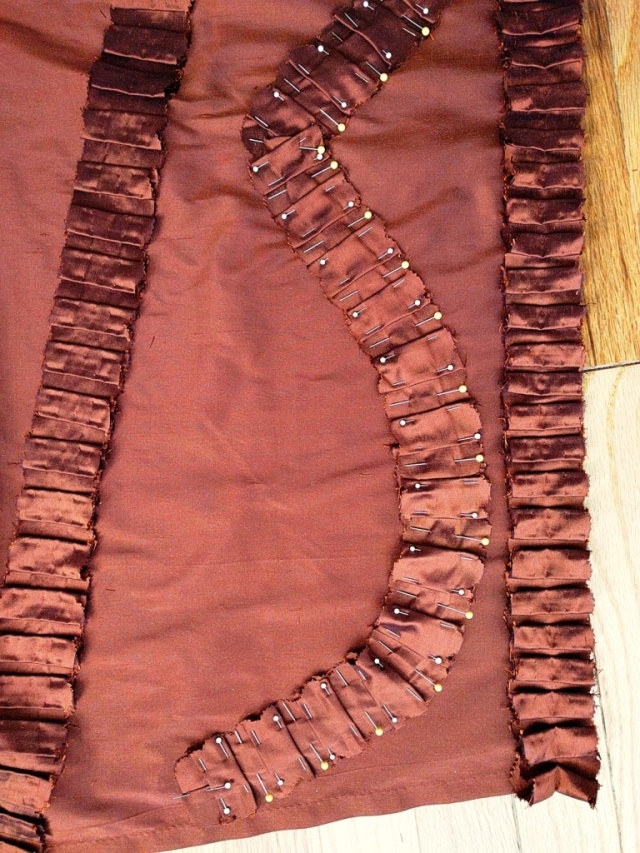 Finishing it off were the faux-button type doo-dads, a really fun little detail! Arnold’s description states the originals are made of card so I used thin cardboard – cut from a cracker box and a six pack holder from this year’s pumpkin ale season ;o) 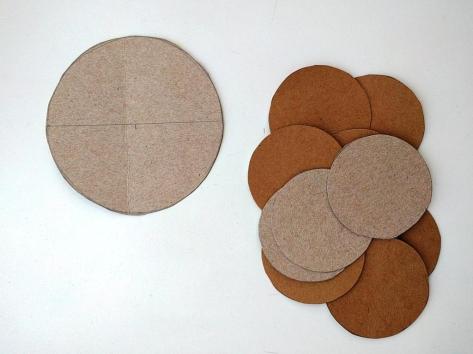 According to the pattern diagram they seemed to be about 2 inches in diameter and there are 10 of them. For the fabric cover I cut one template at 4″ diameter.

Ran a long running stitch around the circumference and pulled up the thread with the cardboard circle inside – just like a  fabric yo-yo.

I then pressed it from the back to flatten the gathers and help it lie flat on the skirt.

Here’s one side with all the trimming + circles/faux-buttons added.

Fabulous! Except that I decided the diameter of the circles was too big for the scale of the trimming at the top, where the upper two circles were placed.

Fortunately, I hadn’t made all of the circles yet, so I took the top two off of the skirt, reduced two of the cardboard circles in diameter about 1/2″, covered and applied them to the skirt and liked it a lot better. I reduced the size of two more and used the ones I took off towards the lower circles on the other side of the skirt. 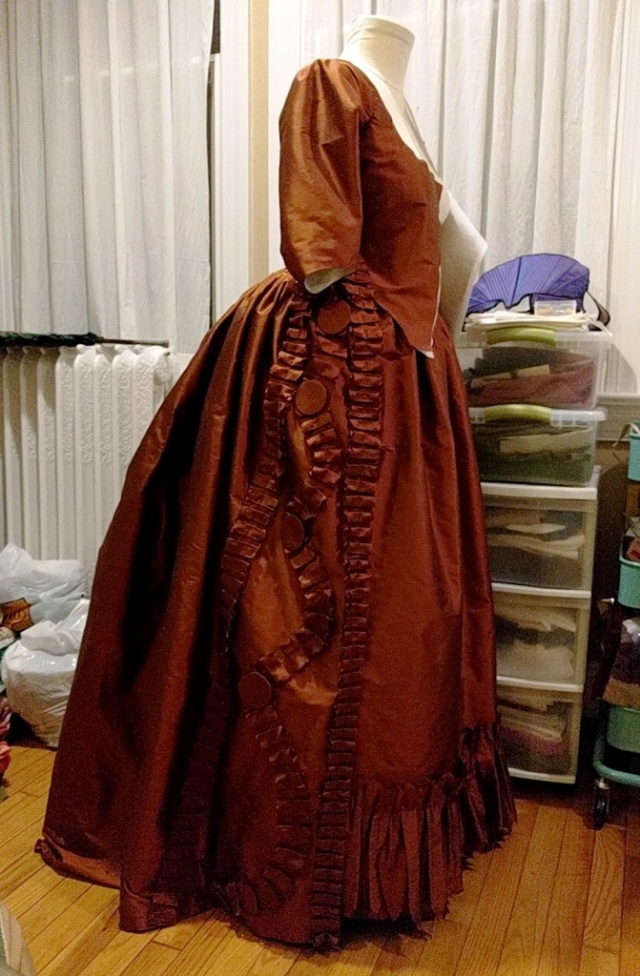 After the skirt was all trimmed and everything done on the bodice that could be done before sewing the skirt to it I couldn’t avoid the waist seam any longer (I was fearing this for some reason).

Since I was going to be sewing the skirt with a curved seam I thought would be easiest to do it without it being full of pins. To which end I ran three lines of basting stitches through all the pleating – one near the top edge, one towards the bottom of the pins and then temporarily re-pinned the pleats lower down for the third line – I wanted pretty deep basting of these pleats to keep them well in hand until I was absolutely ready to set them free! (the pins you see in the photo below are because I already had the skirt pinned to the bodice by the time I thought to take the photo.

I pinned the bodice and skirt together from the bodice side and just eyeballed where I wanted it to sit on the skirt – if that makes any sense.

I then backstitched through all layers with the smallest stitches I could manage through the bulk.

Below the seam on the skirt interior I ran a line of catch stitches across the pleats to help hold them in check.

Many dresses I’ve examined from this period with these small tight pleats in the skirt show this practice, such as this dress at Platt Hall in Manchester:

You can also see that the waist seam was sometimes clean finished with the skirt sandwiched between the outer and lining layers. I have not yet wrapped my head around how that’s managed with the kind of bodice seams I did.

Here’s how mine looked overall after it was all finished (I sewed two lines of overcast stitching to help finished the edges of the silk): 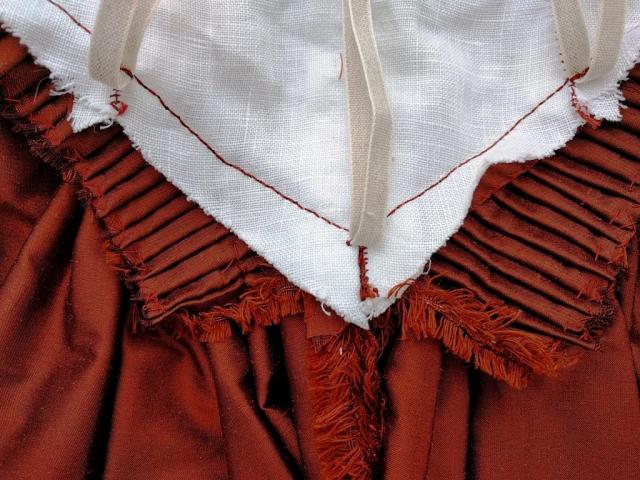 And how it looks from the right side. I won’t lie, I’m pretty chuffed with how it turned out ;o)

Finally, I was able to finish the bodice. The fabric edges were folded in approximately 1/4″ with the lining folded under slightly more to keep it from showing on the right side.

I continued the same kind of stitching around the rest of the perimeter edges that I’d started.

The final finishing touch on the bodice was the neckline trimming (hooray for an end of scallops – for now!). In the photo it may look like there are three lines of stitching attaching the trim to the bodice but that’s just the pin marks, it’s only stitched through the middle. I had given the trim a light pressing/steaming to partially flatten it both for the look and to make it easier to sew. A quick steam takes the pin marks out.

And here’s how the whole thing looks – on my dressform, Maddy, who does not have the correct bust profile for this style, but oh well, you get the idea.

There were just two more little finishing touches left. The first was to make a breast knot to wear at the centre front neckline. I spent way too much time scouring etsy for vintage ribbon to use for this but was finally successful! I knew from early on that I wanted some little touches of contrast and had decided on pale aqua/robin’s egg blue for the colour. This is the ribbon I got – complete with the original roll!

There were 3 yards left on the roll, enough for the breast knot, a bow to go in the wig (which you can see in the background below, before I properly styled and trimmed it) and to have a sash around the waist if I so choose.

The last finishing touch was adding strings and loops to the skirt interior to draw it up a la polonaise for dancing and just whenever I feel like having it extra froofy! 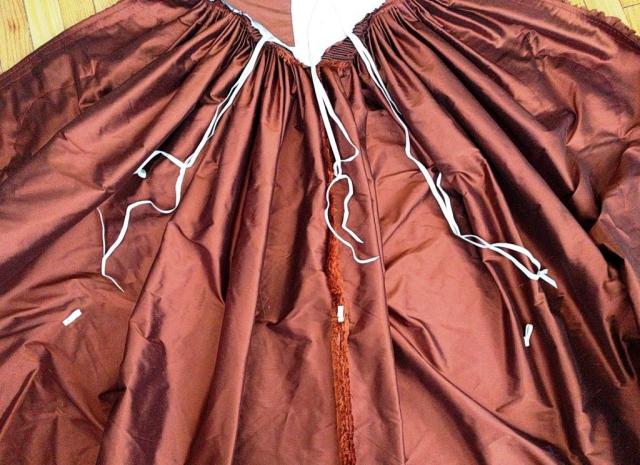 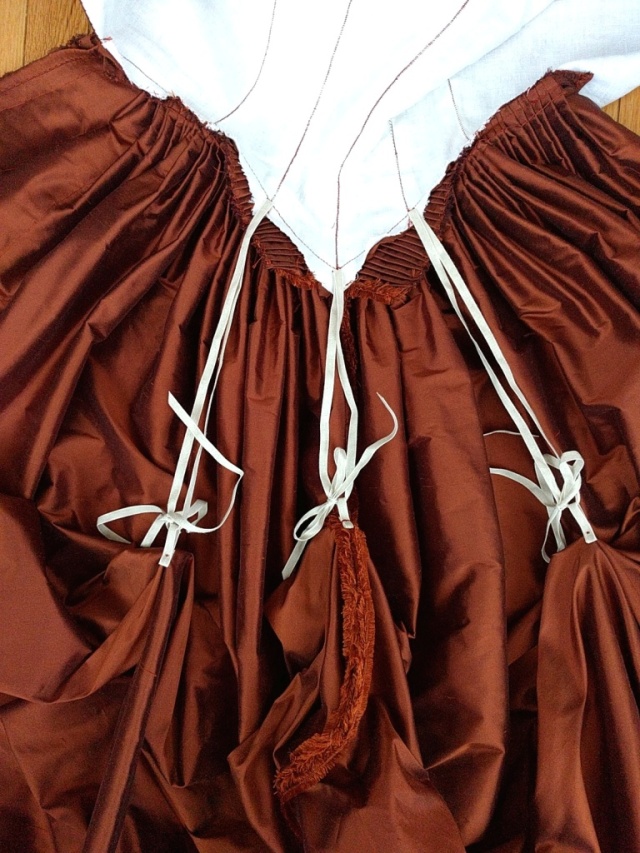 Next post will show you the whole look! I got a few nice shots at the ball I made this for and Taylor very kindly offered to do a photo shoot for me today!

18 thoughts on “Italian Gown – The Gown Skirt & Putting it All Together!”